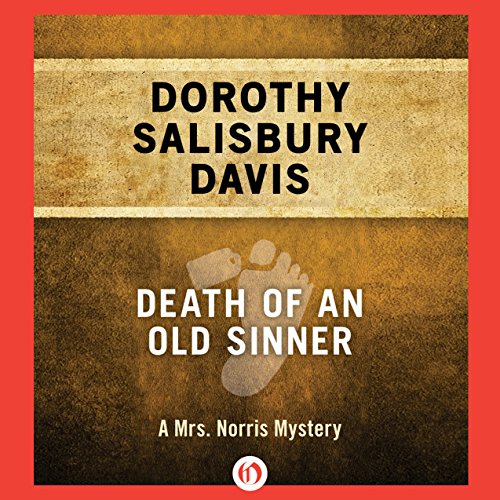 Death of an Old Sinner

By: Dorothy Salisbury Davis
Narrated by: Terry Donnelly
Try for $0.00

General Ransom Jarvis is writing his memoirs about a distinguished career that spanned five continents and three wars. Along the way, he stumbles upon a scandal about a philandering ancestor - America’s ambassador to England who went on to become president of the United States. But a very clear and present danger embroils the irascible retired general in a deepening quagmire of deceit, fraud, and murder. Enter Mrs. Norris, the housekeeper who has been almost a mother to Ransom’s son since he was a boy. Jimmie is currently running for governor of New York and enjoying his budding relationship with sculptor Helene Joyce. A sudden death changes everything, plunging Jimmie and Mrs. Norris into a bizarre case headed up by Jasper Tully, chief investigator for the Manhattan district attorney’s office. With more lives at stake, the trio follows lead after lead into a web of crime that only the canny housekeeper can clean up in the nick of time. Death of an Old Sinner is the first novel in Dorothy Salisbury Davis’ Mrs. Norris Mysteries, which also include A Gentleman Called, a finalist for the Mystery Writers of America’s Edgar Award; Old Sinners Never Die; and “Mrs. Norris Observes”, a short story in the collection Tales for a Stormy Night.

What listeners say about Death of an Old Sinner