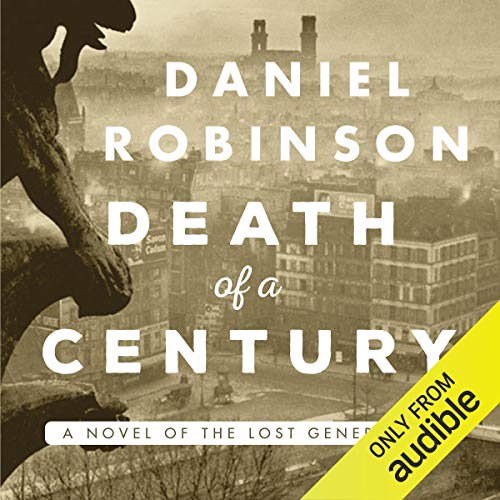 Death of a Century

A Novel of the Lost Generation
By: Daniel Robinson
Narrated by: William Roberts
Length: 10 hrs and 43 mins
Categories: Mysteries & Thrillers, Historical
3.5 out of 5 stars 3.5 (6 ratings)

Death of a Century

Greenwich, Connecticut, 1922. Newspaper man Joe Henry finds himself the primary suspect when his friend, fellow reporter Wynton Gresham, is murdered. Both were veterans of French battles during WWI - the war that was supposed to end all wars.

Unanswered questions pile up in the wake of a violent night: Gresham lies dead in his home, a manuscript he had just completed has gone missing, three Frenchmen lie dead in a car accident less than a mile from Gresham's home, and a trunk full of Gresham's clothes lies neatly packed in his bedroom. Hours after his friend's death, Henry discovers in Gresham's desk drawer a one-way ticket reserved in his friend's name aboard a steamer ship to France. The ticket is dated for the next day. Henry steals away under Gresham's identity, escaping the heated interrogation of the town sheriff, to Paris in the roaring '20s. In the city of light, he becomes a hunted man. To clear his name he must find the man responsible for his friend's murder while evading his own and discover the deadly secret revealed in the lost manuscript. In the process, with the help of other broken veteran expats of Hemingway's lost generation living in Paris, he finds hope in a world irrevocably altered by war.