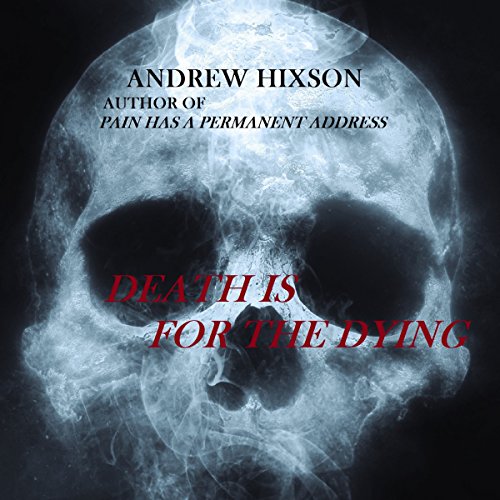 Death Is for the Dying

By: Andrew Hixson
Narrated by: Anthony Goring
Try for $0.00

Archie Andrews tries the new cologne his new girlfriend gave him for his birthday. He goes out to get some food for his birthday party and is later found dead near the vicinity of his apiary.

With no clues, no suspects, and no idea how he died, the Suffolk constabulary call their consulting lateral-thinking private detective to assist them in their investigation.

However, John Handful has a conflict of interests. The new girlfriend of the victim happens to be his ex, Kimberley Ashlyn Gere.

What listeners say about Death Is for the Dying

Received a bonus code for an honest review. Narrator did an excellent job. Of the three books I listened to, I found this one the most interesting.

this was my first and probably my only aduiobook book from this author, the narrator's tone did not change no matter what was going on,the detective is a male pig and if you follow just alittle you solve the "mystery " before the even get started. I like to read back stories and such however like I said male pig he needs to get his life together but all he cares about is when he can get back in bed with his new girlfriend. I really didnt like this all that much. I received this aduiobook and voluntarily choose to reveiw.

This book really didn't work for me...

This book really wasn't for me... I never really cared what happened to the characters. There wasn't any reason to, and that is a bad, bad sign. In addition, I found the mystery to be pretty tepid, as in, the mystery wasn't very mysterious. Within just a couple of chapters, there was enough forcasting that I already knew the who/how, long before our "crack" PI figured it out, and he was leagues ahead of the unbelievably dunder-headed Detective Inspector for the police force!
I also found the narration done by Anthony Goring, simply terrible! His delivery was on a par with watching mud harden! It didn't matter whether John Handful's life was being threatened, or he was having a good time in the company of a woman... Anthony Goring just droned on and on and on! I will never pick up another book narrated by him. It was almost painful in its lack of "spark"!
I was given this free review copy audiobook at my request and have voluntarily left this review.

Needs a bit of editing

The story was interesting, but repeating information isn't really required in such a short story. Narrator easy to understand but a bit monotone to me in the beginning until he warmed up to the story. His characters were good all through,

This is a short but entertaining story in which Detective John Handful has to figure out what caused the death of his ex-lover’s new boyfriend. I like how each book in the series builds depth and adds to the life story of the main character. I also thought the narrator of this book was better than the previous two and did not make the main character sound as much like an old man but I would have liked to have seen a bit more emotion in his voice at times. Even though you can figure this plot out fairly early on in the story, it is still a good mix of small town intrigue, murder, character building and detective work.

Imagine trying out a new cologne and dying for your troubles. This is what happens to Archie Andrews...he is attacked by bees, to which he’s allergic. Handful now has to investigate the death of his ex girlfriend’s new boyfriend! Handful is a bit gruff but what do you expect from a seasoned detective who has experienced lots of loss. I enjoyed this book and love the series.
I accepted a complimentary copy of this book in exchange for an honest review.

This is a quick listen from the John Handful Mystery series. It is one of the better books. I figured it out pretty quickly.

I received this book free I exchange for a review.

Even thought I figured it out early on it was still an enjoyable short story.

It's the bee's knees!

The beauty of this story is the the growth of the characters along the series and the end you know will happen but it's the way it's told and performed that makes it so enjoyable. Both the narration and take are really satisfying and worth a listen.

This Handful is just the right amount of inquiry, small town intrigue and murder. Indo look forward to seeing what else lies beneath the surface for the rest of the series.

Death is for the dying

This book is a very interesting read and one I could not put down. The story was super fast paced and kept me engaged throughout. There was enough back story that I got a strong sense of who John was, where he had been and how he got to where he was.

I found this a bit predictable, I'd worked out half way through who had done it, and how, although the why didnt become clear straight away.

I'd listen to the other books in the series, but only if i had nothing else in my library to listen too
I was given this book in exchange for an honest review

The book is one in a series but it's more about the detective than about a storyline. The story didn't grip me and the narrator had a slow drone although I got used to it. It's a pretty short book also.

This is a short listen with good and bad points. This is book three in the series and I liked the fact that you learnt more about the character, mainly why he became a consultant for the the police. However do you really need two sex scenes in only a two and hour story? I would have preferred the author used the time to add some twists to the story. The mystery was interesting and I liked the usual method of death but there was not enough suspects, which made it fairly easy to know who the killer was. Another problem I have is would John rely be able to investigate the murder with his connection to the victims girlfriend and why wasn't he a ever a suspect? Other than that it is a good little small town mystery.
John Handful is called in to consult on another murder case, the murder of his ex fiance's new boyfriend. His first challenge is to work out how he died, beside in agony. Is Kimberley a suspect? Can John find the killer with the help of his new girlfriend?
The narrator is okay but I don't think he is right for the character because he makes John Handful sound like an elderly man and all the characters sounds the same.
I was given this free review copy audiobook at my request and have voluntarily left this review.

Format: audiobook
Narrator: Anthony Goring
Greed and jealousy is at the heart of this murder mystery.
Having listened to a couple of other audiobooks in this series I’m happy to say the this narrator is much better than the last two and made this book a pleasure to listen to.

I enjoyed listening to this book.
I found it to be fast paced and kept me engaged throughout.

This well written story reminds me of the Midsummer Murder series on TV. If you are a fan of those then you will like this too I expect. A slow moving and predictable storyline expertly narrated but storytelling at its best.