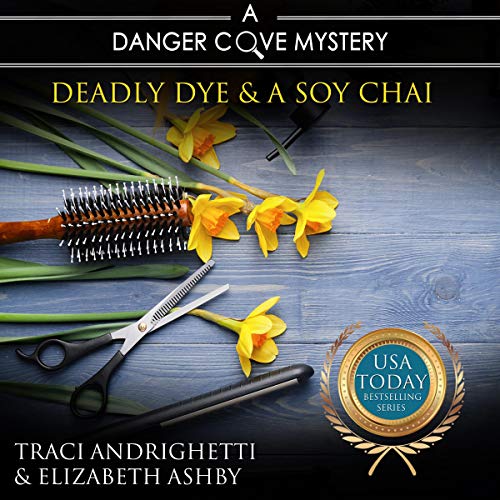 Deadly Dye and a Soy Chai

By: Traci Andrighetti,Elizabeth Ashby
Narrated by: Kayla Perillo
Try for $0.00

This salon's styles are to die for.

Native Texan Cassidi Conti was expecting to face some obstacles when she moved to Danger Cove and opened The Clip and Sip, a hair salon that gives away free drinks. What she wasn't counting on was a client dying during a dye job. But when 80-year-old Margaret Appleby comes in for her biweekly appointment, that's exactly what happens: Margaret drinks her usual soy chai, dozes off under the dryer...and doesn't wake up. Now, The Clip and Sip is under suspicion, clients are wary, and Cassidi is on a mission to prove that while her styles may be killer, her employees are innocent!

But as Cassidi wades through the myriad of suspects in the small coastal town, the killer sets his sights straight on everyone's favorite stylist. If Cassidi doesn't watch her back, she may just end up Danger Cove's latest fashionable victim.

About Danger Cove: Danger Cove is a sleepy little town in the Pacific Northwest and home to renowned mystery novelist Elizabeth Ashby. While Elizabeth swears the stories she writes are fiction, you can find the inspiration for her murderous tales all over Danger Cove...from the intriguing cast of local characters to the places to eat, play, and explore in Danger Cove. Don't let our name fool you - we're the friendliest (even if deadliest) town in the Pacific Northwest!

What listeners say about Deadly Dye and a Soy Chai

Sometimes family is a blessing....

Other times, family can be a curse.... A paid for Victorian? Awesome! The fact that it’s a former whorehouse, full of quite explicit erotica? Less awesome.

Cassidi has great things happening, and then she has murder, drug dealing, conspiracy and mayhem.
Welcome to Danger Cove!

This is a fun, stand alone mystery. The Danger Cove series is a group of authors writing stories set in the same town. While a few characters cross over, each book is complete in itself.

Deadly Dye and a Soy Chai is light hearted and fun. The narrator has distinct voices for each character, so you can always follow the story; however, I do agree with previous reviews, she doesn’t “bring the story to life”

Overall, it’s a good story with adequate narration. Kudos to authorTraci Andrighetti. IMO narrator Kayla Perillo is good, not great. I do feel she will get better with each performance.

This is the first book I have read from this author and I will definitely be reading more. She does an amazing job writing a mystery that keeps you guessing till the end. The story line is also really good with entertain characters. I highly recommend mystery lovers to read this book!

Fun storyline with a mystery twist! Narrated really well- lots of fun character voices without being over done. A great listen!

Deadly Dye and a Soy Chai is a fun, light-hearted mystery that stays serious enough to keep interesting, but light-hearted enough to make it very enjoyable and easy to listen to. The narration was fantastic and really enhanced the story with different voices and accents to bring the characters to life, and her voice is great to listen to. I hope another audiobook follows soon!

Beauty has never been so dangerous

This is the first book in this series that I have listened to but it won't be the last. I knew Traci Andrighetti to be a great writer as I love her Fanki Amato series so thought I would give this book a go, so glad I did as she didn't disappoint. I don't think it is quiet as funny as her Fanki books but it follows the same light hearted humour with great characters.

How do you keep a new business up and running when one of your customers dies under the dryer and one of your employees is accused of the unusual murder, oh and the shop you work in used to be owned by ladies of the night and there decor is still plainly visible Things really steam up when somebody starts planting evidence and it a race against time to so love the murder before the police make an arrest.

This was the first time I heard this narrator and found her speaking to pleasant and easy to listen too.

Over all a good book!

Thrilling Story with a Great Narrator

Deadly Dye and a Soy Chai was such an exciting book to listen to. As a fan of murder mysteries, I found myself invested in the happenings of Danger Cove and was consistently on the edge of my seat waiting to peg suspects and solve it myself! What's more, Kayla Perillo served as an excellent narrator, seamlessly transitioning between a myriad of accents - which isn't easy!

Cassidi Conti moved from Texas when her uncle left her a house and hair saloon. Her Cousin Gia came with her to be the makeup artist. Trying to get her business off the ground, work on a business degree and give pay her bills is hectic. Then a customer dies in her salon chair and now she has a murder to solve. Quirky and and a little romance. Recommend series.

This book was great! I enjoyed the twists and turns. Blue is my favorite color lol

A hair dye and murder

I am a huge fan of Cozy Mysteries. I stumbled upon Traci Andrighetti's page and her books sounded fun. This installment of the Danger Cove Mysteries takes place in the town's hair salon. The story follows the new Hair Salon's owner, Cassidi Conti, who inherited the salon from her recently deceased Uncle Vinny. Uncle Vinny was known around town for his appreciation for erotica, especially since the salon was the town's former brothel. While Cassidi is trying to increase revenue at her salon and improve the salon's image, a known community member is murdered in the salon. To top it off, her uncle's suspicious death is also unsolved. Cassidi and her wacky cousin from New Jersey try to see if they can solve the murders to redeem their livelihood. Each of the characters have their own quirky characteristics and contribute to the sleuthing in their own way. There are many twists and turns that keep you wondering until the end. Not only can't I wait to read more by Traci, but I also want to read more from the Danger Cove series. The narrator did a great job of differentiating between characters. It was easy to understand who was talking and when the person changed.

This series is really well written, the characters are well developed and you really enjoy getting to know each character which pulls you into the story line (that is a true art - not all authors do that). The mystery is well plotted and you enjoy trying to figure out "who dunnit!"