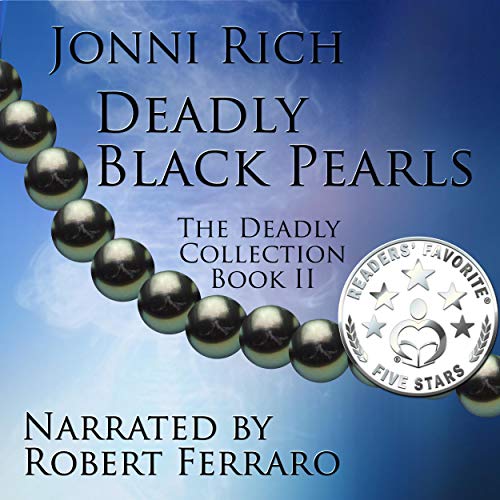 By: Jonni Rich
Narrated by: Robert Ferraro
Try for $0.00

The antebellum spring mansion tours are in full swing in the little South Louisiana town of Ville Nouvelle. Emmaline Beard, local leading citizen and theatrical producer, is tour hostess at LeFevre House, an ancestor’s former home. Emmaline is astonished when an old friend’s granddaughter, Carol Powell, arrives and thrusts a package into her hands and then flees as hastily as she arrived. Emmaline chases after her unsuccessfully. The package contains valuable black pearls.

The following evening, Emmaline discovers Carol’s crumpled body at the foot of a staircase at LeFevre House, obviously a homicide. Emmaline suspects the pearls were stolen, and they are the reason for Carol’s murder.

Emmaline enlists the help of her life-long friend, Byrd Jeffcoat, to catch the murderer and settle the question of the mysterious black pearls. While trying to solve Carol’s murder, another random murder occurs. A nuclear waste protest march led by a celebrity from the area has brought strangers into the small town.

Is a homicidal maniac at work, perhaps brought in by the protest march? Is there one killer, or two? The amateur sleuths hazard their way through tumults of theft, murder, arson, and even a theatrical production to unravel these grisly murders.