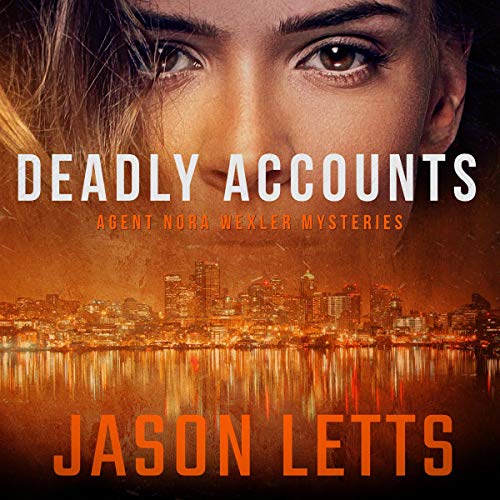 By: Jason Letts
Narrated by: Trudi Knoedler
Try for $0.00

Introducing Nora Wexler, the FBI’s newest agent and the one best suited to track down a high-tech serial killer.

Spurred by the incessant threats of violence against women happening online, Nora Wexler joins the FBI on a mission to put them to an end, but she quickly discovers that being an agent comes with challenges that don’t always fit into her plan.

An attractive Iraq War vet and fellow agent named Travis Greer helps show her the ropes until he leaves for vacation, which happens to give him a front-row seat to the schemes of a twisted serial killer using anonymous internet accounts to play smoke and mirrors with his victims.

Suddenly, Nora is whisked to Seattle to join Greer and face off against a mysterious nemesis terrorizing a group of female business owners. It’s sink or swim for Nora, whose reputation within the FBI will be on the line as she strains her faculties to save them.

Deadly Accounts is 86,500 words in length. Also check out the sequels Deadly Pasts and Point of Failure!

What listeners say about Deadly Accounts

When digital threats get real

Deadly Accounts is the first novel in the Agent Nora Wexler series of action thrillers written by Jason Letts. The story follows rookie FBI agent Nora Wexler and her attractive male partner Travis Greer, respected veteran of the Iraq war, as they investigate a series of really unsettling crimes. From digital harassment to a serial killer and to online abuse, Deadly Accounts keeps the listener on their toes with a strong plot, colorful characters and a touch of romance for the entire duration of the audio production.

Extremely talented audiobook narrator and producer Trudi Knoedler enriches and elevates the narrative experience with her unmistakable and instantly recognizable voice. She gives life to each of the characters with passion, switching seamlessly between voices, using a subtle change to her tone, inflection, and cadence.

When things get really heated up, she draws on her experience on the theater stage to infuse the action with emotion and urgency. Although this is the first time that I listen to an audiobook narrated by Trudi Knoedler, I was instantly captured by her performance and delighted by the way she uses her unique voice in order to create the best experience for the listener.

Fast paced, timely, well written and captivating, Deadly Accounts offers a good time from beginning to end and it’s made even better by the superb narration delivered by Trudi Knoedler. If you are in the mood for an immersive mystery thriller, give this one a chance.

If you liked this review, please vote Helpful below and find more of them here and on theAudiobookBlog. I also post honest reviews at the author, narrator, or publisher's request, you can get in touch with me for more details.