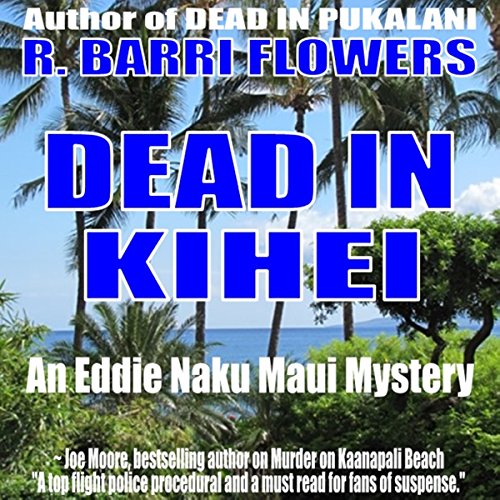 From award-winning crime writer R. Barri Flowers and the best-selling author of the Murder in Hawaii Mysteries, comes the second book in the Hawaii detective series, Dead in Kihei: An Eddie Naku Maui Mystery.

Private investigator Eddie Naku's latest case involves the apparent suicide of a friend and fellow private eye, Frank Iwamoto, who fell from the lanai of his eighth story condo to his death.

Naku refuses to believe Iwamoto was suicidal, in spite of evidence to the contrary. Proving he was murdered won't be easy, but Naku is not about to give up. In the process, he comes up with a number of suspects, twists, and turns, as well as Frank Iwamoto's risk-taking lifestyle that likely put him in harm's way.

As Naku begins to get to the bottom of Iwamoto's death, while juggling multiple cases and complicated romances, he finds his own life in peril.

What listeners say about Dead in Kihei

I really liked this book (and the previous book in the series). It has a grittiness typical in some detective novels, yet is tempered by the beautiful setting of Hawaii. I always find the cultural references, language, and customs that Flowers includes for the native Hawaiians really interesting. I think his characters are really realistic and his story lines are always interesting. I listened to the Audible audio version of this book narrated by Jane Boyer. I REALLY like her voice. She has a deeper voice (or maybe that's just her character voice) than most of the female narrators I have listened to, and it is really easy on the ear. She doesn't have any of the high-pitched, whiny characters that are so typical with other narrators. Overall, if you like mystery, detective novels, or just want to escape to the Hawaiian islands, I highly recommend this book.