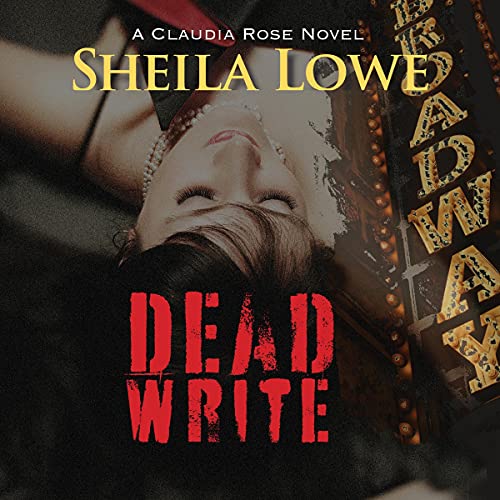 Sheila Lowe’s mysteries “just keep getting better” (American Chronicle) thanks to feisty forensic handwriting expert Claudia Rose, who knows that when it comes to solving a murder, sometimes, the pen can be mightier than the sword.

Claudia heads to the Big Apple at the behest of Grusha Olinetsky, the notorious founder of an elite dating service whose members are mysteriously dying. The assignment puts Claudia at odds with her boyfriend, LAPD detective Joel Jovanic, who suspects Grusha herself is trouble.

Drawn into the feckless lives of the rich and single, Claudia finds herself enmeshed in a twisted world of love and lies fueled by desperation. But desperate enough to kill? Clues in the suspects’ handwriting might help Claudia save Grusha’s already dubious reputation before the names of more victims are scribbled into someone’s little black book.

What listeners say about Dead Write

Dead Write (Forensic Handwriting Mystery #3) was another good read by Sheila Lowe. Forensic handwriting expert Claudia Rose is used to solving murders. She heads to New York for a job for the founders an elite dating service. Unfortunately this case puts her at odds with her boyfriend LAPD detective Joel Jovanic. He believes that the client, Grusha is trouble. Claudia uses clues in the suspects handwriting to find out what's going on with the business. I really enjoyed this book and can't wait to read more in this series.

I love that Claudia takes nothing at face value and doesn't take no for an answer. Her inquiring mind goes behind the mask and searches for the truth. Her detective skills, observations, and writing analysis make her a force to be reckoned with. I love that Joel values their relationship enough to seek resolutions to problems before there is damage to their relationship. What an ending!!! I voluntarily listened to a free copy of this and am giving an honest review. The narrator did a great job bringing it to life.

This is my first book written by Sheila Lowe. I found Dead Write to be entertaining and interesting with a complex plot. The characters are engaging the story moves at a quick pace. I look forward to the next book in this series.

I received this book for free in exchange for an unbiased review.

Don't pass up this book.

I enjoyed listening to this book. looking forward to Sheila other books. Anna
did good job reading the book.
I also received this audio book for free for exchanged for honest review.

Great addition to this series. Lots of twists and turns. Looking forward to next in this new and unique take on forensics.
This audio was given to me free and I voluntarily gave this review.

This was a good read. Claudia is a handwriting expert.In this story she is hired by the owner of a dating service who is has fired her previous one.Claudia finds too many mysteries when she gets across the country. Anna Crowe was a fine narrator.I was given this free review copy audiobook at my request and have voluntarily left this review.

I love this series. Claudia is a handwriting analyst and she is hired to help a match making club to read the handwriting of the clients After studying certain people including some that had accidents and died. She feels there is something not right. She feels the "accidents" may have been murder. She starts investigating to prove her theories.

This book had me on the edge of my seat through out the book. This author has never disappointed me with this series. Can't to read the next. I was gifted this book in exchange for an honest review.

The narrator is fantastic.

Great story! Excellent characters and storyline. If the other books in this series are this good, I am definitely interested in exploring this series more!


I received a free copy and left my honest review

Dead Write, Forensic Handwriting Series, Book 3. My third read from author Sheila Lowe and the third book in the Forensic Handwriting Series. Good, well-written mystery, even better than the first two books. The characters likable & attention holding. The plot and the sub-plot were both well-developed. I'll definitely be reading more in this series. I was impressed and enjoyed the vocal variety & inflections of narrator Anna Crowe. I look forward to reading more in this series & from this author. (RIP Marley January 20, 2014 - July 24, 2018)

Dead Write is the third book in this series featuring Claudia Rose, a forensic handwriting expert, but it can easily be read as a standalone. I have read all of the published books, but I accidentally read them in reverse order and had no trouble bouncing back in time. Dead Write sees a much more emotional and uncertain Claudia than I have seen in future books. She is newer to and less sure in her relationship with her boyfriend, LAPD Detective Joel Jovanich, and it was interesting to see that side of the usually spunky and confident Claudia. Professionally, she is feeling especially challenged, too, when she takes on the job of analyzing the handwriting of members of an elite match making club. A high number of young women in this club have been dying in bizarre accidents, and Claudia painstakingly pieces together the clues to a shocking ending. I was not only completely surprised by the perpetrator of the scheme, but equally surprised by the motive. Lowe sprinkles in fascinating handwriting analysis tricks and truths throughout the story, and it is difficult for me to decide what is my favorite part; the intrigue, the romance, the action, or the knowledge, so I just enjoy them all!

Anna Crowe narrates most of the books in this amazing series, and she always does a phenomenal job with her performance. I can't imagine a better choice for Claudia's no-nonsense (but secretly soft) personality. Crowe differentiates well between the male and female characters, and her delivery is flawless. I am looking forward to many more collaborations between this talented author and narrator.

Very interesting to learn about handwriting analysis and how it revealed some interesting secrets. Sheila kept me wondering right till the end.

Another brilliant book I was totally involved from page 1 I am so enjoying this series of books, narration is brilliant too.

Gripping read with the plus factor!

This is a crime thriller plus . . . and the plus comes in the form of a graphologist. The main character, Claudia Rose, uses her skills to analyse the handwriting of the suspects throughout the novel to work out who might be dangerous enough to be the killer.

The story is set in New York, and the victims are clients of an up-market dating agency run by the mysterious Grusha Olinetsky.

There are many twists and turns as along with Claudia, we try to work out who the baddy is. Meanwhile there's another more obvious baddy to enjoy, in the form of rival, unscrupulous and not very professional fellow handwriting expert, Andy Nicholson!

Alongside the main plot is the story of Claudia and her cop boyfriend, whose partner is coming on strong. Will he stay faithful to her? I'm not going to say!

This novel is part of a series of forensic handwriting novels by Sheila Lowe. It stands on its own two feet and is a good, gripping read. It kept me guessing right through to the last page!

Proof of Life” is a story about a woman who has the powers to experience requests from dead peoples’ spirits to communicate with their loved ones.

I was immediately captured, helped along by fantastic plot.
I loved the suspense of this novel and I would listen to more from Sheila Lowe.

Lady, I see strange things every day of the year.


Handwriting expert, Claudia Rose, is engaged by celebrity marriage maker, owner of Elite Dating, Baroness Grusha Olinetsky, to examine the applications of several of her clients. But, although well paid, it is conditional on Claudia travelling to New York to meet with Grusha in person and Claudia almost refused until leading that the post had previously be held by her despised, unscrupulous rival, Andrew Nicolson. Once established in her hotel, Claudia is surprised to learn that three of the owners of the six handwritten papers were dead - why was she expected to give opinions on the nature of people no longer in the dating group? Despite declaring that she is not a detective and has no intention of looking into a possible crime, that is exactly what she does do.

Although there is an ongoing background story, each of the Claudia Rose books are fully stand alone as any pertinent details are given but in such a way as to not annoy those already acquainted with the characters. The main point of interest revolves around the handwriting analysis results given, in sufficient detail to wet the reader's imagination whilst remaining sufficiently brief not to bore. The insights hinted at are fascinating, and Ms.Lowe knows what she is writing about as she is, herself, an handwriting analyst who sometimes is called as an expert witness in trials. This story is interesting, a who dun it? mystery with a little excitement included not only at the conclusion but also mid book when she foolishly accepts a dinner invitation which goes wrong. The whole story does seem implausible but is, nevertheless, an enjoyable light read.

The book is performed with skill by Anna Crowe, whose very pleasant voice delivers the text with expression, good pacing and excellent intonation. Her voicing of the individual characters is also distinct and her narration adds to the overall enjoyment of the book

My thanks to the rights holder of Dead Write, by Sheila Lowe, who, at my request freely gifted me with a complimentary copy. I very much enjoy this series, have even felt myself tempted to discover more about handwriting analysis as a result of reading them, so fascinating are the small insights revealed. Definitely recommended for readers who enjoy sometimes bizarre characters and clean, interesting mysteries - with that added touch of reality from the expert