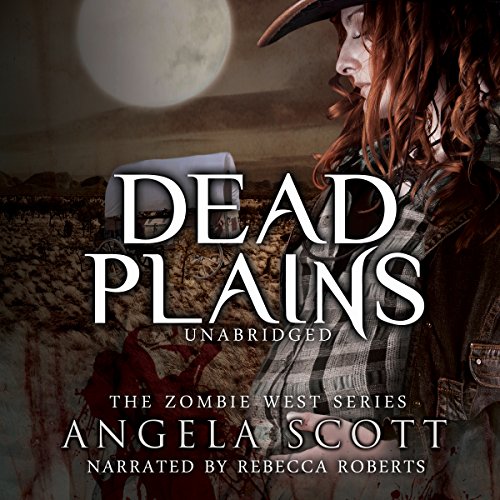 By: Angela Scott
Narrated by: Rebecca Roberts
Try for $0.00

Dead Plains:Book 3 of the Zombie West Series by Angela Scott, the final installment in the multiple award-winning series. "...Sometimes, the ones you least suspect are the ones that should worry you the most...." People aren't always what they seem, as Red has experienced all too well. Strangers are feared, towns are avoided, and everyone's intentions are scrutinized... even those closest to her. Her coveted ability has been revealed to far too many people, and now that a tiny heartbeat thumps and grows beneath her own, the risk has never been greater. As the group of ten searches for a safe haven, a place to finally call home, the sobering reality of it all finally settles over them: nowhere is safe, nothing is permanent, and death is everywhere. One by one, Red's reluctant posse grows smaller, as death claims some, and circumstance claims others. ~ It couldn't be a worse time to bring a newborn into the world... but the baby is coming.

What listeners say about Dead Plains

wish it would continue!

hate that it ended would love for the story to continue and see what happens with the kids.

Love the concept of zombies in the old west.

I love the ending of is it? The author left it open ended. I am kinda hoping for a book 4. I got this book from storyorigins and this is my voluntary and honest review.

Not sure if this was the conclusion to the trilogy; if so, I thought it was great. The storyline was engaging, and everything came together great. Trace and Red with their extended family hit the road, trying to keep ahead of the zombie hoard. Red is pregnant and is determined to find a safe haven for her baby. Unfortunately, nowhere is secure from the walking dead. The constant threat the zombies are ever-present. Angela Scott created a distinct description of what is happening, building up tension with great action scenes. The writing was clear and precise. However, I found the pace slower than the previous books. Rebecca Roberts did an excellent job with the narration and all the various characters. This was an enjoyable listen, and I recommend the Zombie West series to fans of the genre. I was given a free copy of this audiobook at my request and have voluntarily left this review.