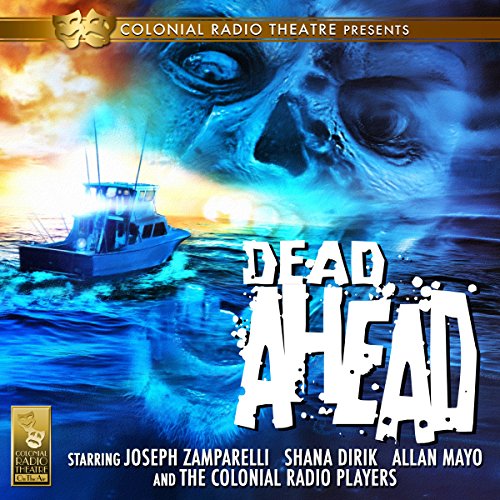 On a restless ocean, a group of weary survivors contemplate their grim fortune: What had started out as a fun little fishing trip soon turns into a nightmare of damnation, trapped on a floating prison. The continents have been hit by a plague that has turned humanity into living corpses - leaving our castaways at sea to fend for themselves. With provisions low, hope comes in the form of a luxury liner sailing into view on the horizon. All they needed to survive would be onboard, but who among them has what it takes to find out what happened to its crew and passengers? From the award-winning Colonial Radio Theatre and based on the comic book by Mel Smith and Clark Castillo, Dead Ahead promises to be a cruise you will never forget.

What listeners say about Dead Ahead

IF YOU LOVE ZOMBIES, YOU WILL LIKE THIS THRILLER

Why, as someone not a zombie lover, especially decaying, human eating zombies, buy this book? Very much liking Colonial Radio Mystery Theatre, and in particular, enjoying the voice and acting of the Captain of the ship, there was enough glimmer of hope that this would avoid the probable, if not inevitable end that I gave into it.

The story is good, and it is always exciting and interesting to see how able and clever people handle life threatening situations. It makes you wonder how you would fare in such demanding situations, whether moral or physical in nature.

The acting is very good, the characters well drawn enough to be consistent and mostly interesting, and the dramatic situation of an outbreak, not of a virulent virus, but of decayed zombies preying upon live humans in order to consume them is a sufficient thriller. If one is scratched even, it is too late; one will join their mindless, focussed ranks.

The description is quite adequate for the storyline. I didn't stay until the end, and "jumped ship"
not long after the beautiful "Red", a friend to the Captain, has to shoot one of the crew members after he gets scratched on an island jump for resupplying. Lesson learned: I just like history
better.

great story worth the cash for it . you do fill for them because of the great voice actting n the great story

The following spoiler will illustrate how ludicrous the writing of this play is...

One of the character's lover gets bitten by a zombie. He hasn't begun to show symptoms yet, but she was quite anxious to take a gun and kill him before any symptoms took hold. Later, while talking about what she had done with another character, she reveals that she felt relieved that her lover was dead. She goes on to explain that she felt relieved because she didn't want to tell her lover that she didn't want to marry him. She didn't want to have to hurt him! So, she'd rather KILL him than have to hurt him by breaking his heart. This is one cold, selfish b*tch!

dead on. dead ahead