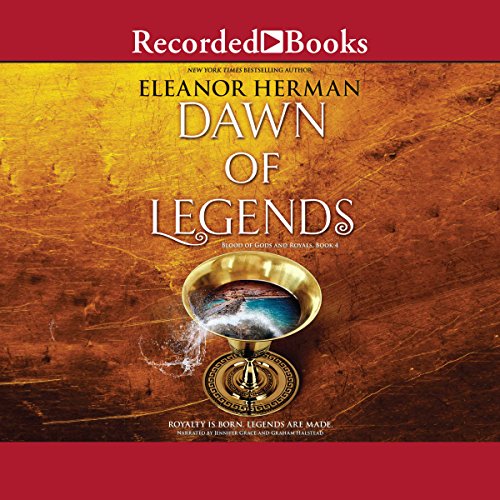 By: Eleanor Herman
Narrated by: Jennifer Grace,Graham Halstead
Try for $0.00

Book four, the explosive finale to the Blood of Gods and Royals epic fantasy series, is full of royalty, magic, danger, and betrayal and featuring the life of a young Prince Alexander before he became Alexander the Great. Steeped in real history and infused with all the myth and mysticism of the time, this series is perfect for fans of Game of Thrones, Kiersten White, Kendare Blake, and Evelyn Skye.

The story begins with a tidal wave and ends with the very Fates themselves, as Prince Alexander of Macedon steps into his role as visionary warrior and unites the Greek States, leading them all to a new dawn of legends. Earth Blood, Snake Blood, Smoke Blood, and Spirit Blood all reveal themselves - through Princess Cynane who seeks to build an army of new Amazons; through Kat and Jacob who will spy on the Aesarian Lords and make a plan to defeat the deadly Spirit Eaters; through runaway princess Zofia, who gives birth to a new Fate; with cameos of Aristotle and a young Asesop; and through Alex and Heph, reunited friends who together will turn the tide of war into the greatest alliance all of history.

Inspired by a teen Alexander the Great, steeped in true history and infused with the magic and mythology of ancient Greece, the final Blood of Gods and Royals novel is an epic fantasy masterpiece of royalty, war, forbidden love, betrayal, and, most of all...the triumph of the human spirit.

What listeners say about Dawn of Legends

If I could, I would have listened to this non-stop but glad I finish so I can get some work done! This is one of my favorite YA fantasy series, full of action, adventure, magic, and a little romance, the elements that makes a great series. I am an adult that enjoys reading well written YA fantasy books. The writing is superb and the characters are strong and likeable. I love the blending of history and fantasy, author did a fantastic job of making Alexander the Great come alive. The bonds between the characters, the friendship, love and loyalty that they had for each other made this a great series. I love the interactions and bond that Katarina and Jacob had, reminded me of Katniss and Gale in The Hunger Game. There were a lot of different characters, POV but that made the story more interesting, the writing flowed really well and all the storylines merge perfectly. I am left heartbroken at the end but worth the listen. You don't need to listen to the previous 3 books to enjoy this book, author does a great job of recapping previous events through the characters narration. Although I would highly recommend you listen to them all!

Other YA fantasy series that I would recommend: