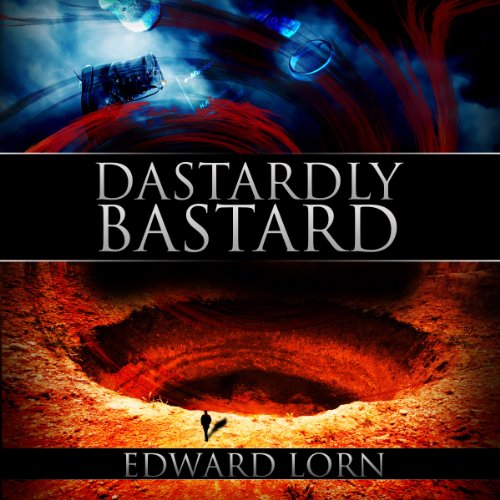 When war photographer Mark Simmons is sent to do a promo on Waverly Chasm, he assumes it's a puff piece, a waste of his talents. Widow Marsha Lake brings her son, Lyle, to help him heal after his father's death. Donald Adams, aka H.R. Chatmon, joins the tour to get away from a sticky situation. Justine McCarthy consents to the hike to placate her boyfriend, Trevor. For Jaleel Warner, the tour guide, walking the chasm is just part of his job. Each of these people must face their darkest memories in order to discover and defeat the secret buried in Waverly Chasm.
©2012 Edward Lorn (P)2013 Edward Lorn

Not at all what I thought .Did not like it at all. Narrative not good story only so so

Trevor ended up with no pants.

Would you listen to Dastardly Bastard again? Why?

Yes, it made me laugh and gasp and wonder what I would do if I had to face my deepest, darkest crap again. But in the great outdoors. With witnesses.

What was one of the most memorable moments of Dastardly Bastard?

What does Glenn Marcum bring to the story that you wouldn’t experience if you just read the book?

His voice adds tension. I tend to read faster than the narrators, so audiobooks slow down a story for me and allow me to enjoy the details more.

Mark facing the dead soldiers, and then using them to take out an even worse foe.

Now you probably want to hear about the book. In short, I loved it. It was fast-paced, full of wit and suspense. Each character came with their own baggage, their own horrors, that they had to face. Justine was my favorite. She was a real hero in this story, pulling folks together, leading the way when the path was not clear. At first I didn’t care for Donald the writer. He was a bit of a dick. But then we get a peek at his deepest horror and shame and I think my heart cracked a little for him. After that, I liked him quite a bit. Mark was also a favorite as he faced a professional quandary as a war correspondent – what to publish and what to delete, how much truth to tell?

I liked that not everyone survived (because I do find it unrealistic when all the good guys survive a paranormal attack of some sort). The pacing was good (never a dull moment). And the mix of people was great – various sizes, various skin tones, single, paired up, widowed, etc. The ending was more upbeat than the other two Lorn books I have read, so that was unexpected for me (but I liked it!). I really enjoyed that the characters had to go through some tough crap, face it, makes friends with it, and then they could attempt to come out the other side. Nothing was just given to the good guys.

I’ve now read three Lord books and quite enjoyed each one. This one did not disappoint and may have been even more enjoyable because it was an audiobook and I could listen as I worked.

Narration: Glen Marcum was an excellent fit for this audiobook. He infused the story with tension, tenderness, pissed-offness, etc. as needed. Edward Lorn writes well, and Glen Marcum did a great job of giving those characters a voice. I especially like his voices for Lyle and for Justine. Oh, and Trevor (who sounded stoned throughout the book).

Go get you some Lorn!

There are shadows that attach themselves around the living. If you can see them, you’re special. Oh, and you’re probably going to be dead soon. Well, maybe not. All you need to do is survive the mind trick that is the Dastardly Bastard and solve the mysteries of Waverly Chasm before you end up six feet under…or worse.

I checked this one out on audio and really dug it. The narrator did a fantastic job with the tone and cadence of the piece and, as always, Edward’s characters were drawn well and deeply broken in all the right places. If Edward Lorn is not on your “must read” author list, then you should change that immediately. Now, go get you some Lorn.