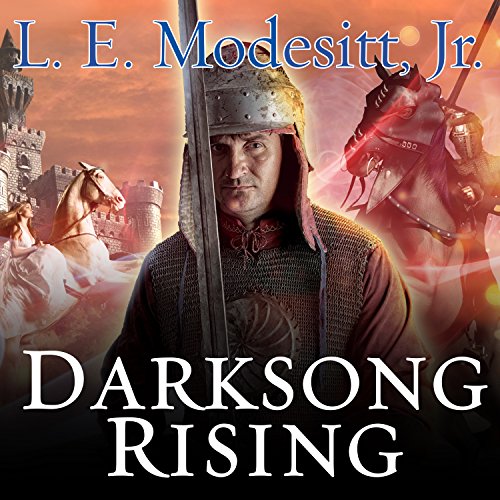 Listeners first met Anna Marshall in The Soprano Sorceress, when she wished to be anything other than a music teacher and singer in Iowa - this was before she was pulled into the world of Erde, where her gift of song became a gift of magic. Her musical ability has since given Anna influence, control, and the potential to be an enormously powerful sorceress.

Now, as the regent of Defalk, Anna must battle two men who would destroy her and claim Defalk for their own.

What listeners say about Darksong Rising

Feminist Fantasy at it's best!!

I love this series. it's Feminist fantasy at it's finest. L.E. was on to something here!!!

The story and world are amazing even if the language is not such that I can listen to it where my children might hear.

an OK story but it is not as clean and flowing like t H e authors other books. the characters did not seem human or intelligent.

Continuation of a predictable storyline. The reader looses some effectiveness trying to effect male vocal tones, and still, the term is VOCALEEZ, not vocalize. Tantor Media, please consider technical advisors for your readers.