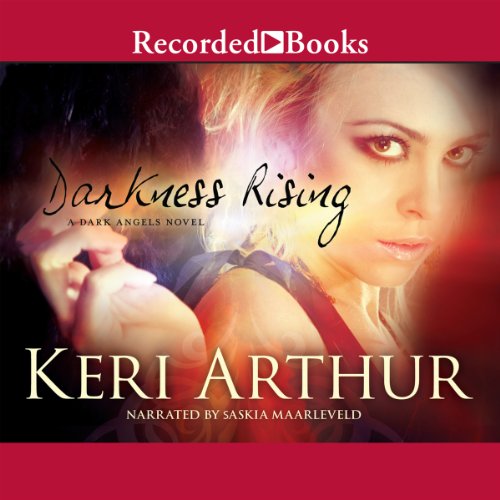 By: Keri Arthur
Narrated by: Saskia Maarleveld
Try for $0.00

Risa will go to any lengths to avenge her mother’s murder - even if it means making a pact with the most evil vampire she’s ever met. Lethal and powerful, Madeline Hunter is leader of the vampire council, and will put her resources behind finding the killer - for a price.

The venerable vampire requires the assistance of Risa’s psychic powers. Quid pro quo. Someone - or something - is targeting the elders of the local council, cursing the immortal vampires to rapidly age, sink into madness, and die. Risa must track down the vengeful being responsible.

But Risa’s father, a rogue Aedh priest, also enlists her in a dangerous mission. And not even the great Madeline Hunter may be able to protect her from the shadowy forces that desire nothing less than Risa’s destruction.

What listeners say about Darkness Rising

Which character – as performed by Saskia Maarleveld – was your favorite?

All? Saskia has a beautiful voice.

Darkness Rising opens with Risa's father forcefully ordering her to find the keys that he created to open the gates to hell. Nice guy, yeah? Then Risa is essentially blackmailed by the head of the Directorate, Madeline Hunter, into doing Hunter's dirty work in exchange for help solving Dia's murder. Considering that's all crammed into the first chapter, you'd think that the action would be nonstop . . . and yet, not so much. At least it felt slow to me.

It may have been because I listened to this one in audio, but I found myself oddly unable to focus on the story and probably missed a good quarter of it from zoning out on the narration. The big things that I was worried about while reading the first book came to pass: (1) Risa continued to trust the wrong guy, Lucian. He reminds me of a certain snakelike character from the Riley Jensen, Guardian series, and I don't much like him. (2) Risa failed to see what her reaper, Azrael, was thinking. He clearly has a thing for her, but she is only seeing her own perception of his actions and beliefs and not understanding why he is perpetually frustrated with her. Come on, girl, get it together!

It's a little frustrating to see Risa repeating so many of Riley's mistakes, especially while she notes that Riley had spoken to her about these things. Risa trusts the wrong people, is ill-prepared because she lets people rush her and boss her around, and doesn't ask the right people for help because she is too worried about them getting hurt, even if their expertise means that they are more likely to not be hurt than she is. I wanted to shake her a few times.

You know what else is frustrating? The lack of sex. Heh. There are a couple of scenes, but I was really hoping that this series would be a bit hotter than it's turning out to be.

Here's what did work: Risa is clearly starting to come into her own. In Darkness Unbound, Risa is constantly turning to others for help because she doesn't have the skills or knowledge to do it on her own. That's not necessarily a bad idea, true, but it was nice to see her take a more prominent role in her investigation. The sword she acquires doesn't hurt her new badass image, either.

Given my love of the prequel series, it's fairly obvious that I'm not going to give up after one lackluster installment. Really, it's not bad, it's just not quite up to par with expectations. Here's hoping that the rest of the series takes us on a sexy, fast-paced ride!

Liked the first book in this new series from Arthur. I loved her Riley Jensen series, and this is several years down the road from that. Many of the same characters. I didn't like the narrator quite as much, something about her voice bothered me.
Risa is a strong if somewhat confused heroine but likable all the same and the other characters fill out the story nicely.

i keep reading this series and i can't tell if i like it or not. i keep going back and forth between liking riza and thinking is an idiot driven by hormones.

This series grabbed me with the first chapter!!! I couldn't put this book down!!! Great story line with twists and turns with a lot of .... No Way and Holy sh*t thrown in!!! You Have to be read his book!!!!

I really enjoy this series! I love the reader. She’s amazing! Really brings life to the book. If the reader isn’t good, then I will not finish the book. I’m so excited to read the next book!

More of the same

What a great new series!

I definitely enjoyed listening to Darkness Rising, which is the 2nd book of the Darkness series by Keri Arthur. Although I did like the first book (Darkness Undone), this one really picks up speed as Risa's quest begins as she learns that she must find these "keys" to prevent a sort of mystical armageddon. Risa's Aedh father makes a brief but creepy appearance early on, and Lucian--Risa's romantic interest from book 1--starts to show more of his true colors.
The world building in this series is really quite unique, which makes it a truly fun listen. Although my favorite part of this book is definitely Azriel, Risa's reluctant guardian.
Also, the narration by Saskia Maarleveld is absolutely fantastic, and I just love her Australian accent.