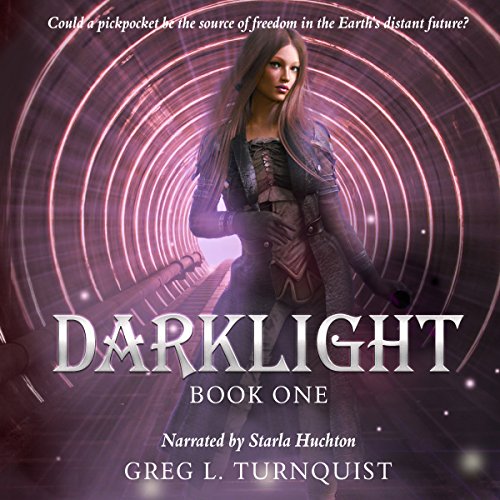 Darklight: A Coming of Age Fantasy

By: Greg L. Turnquist
Narrated by: Starla Huchton
Try for $0.00

Snitch, a young woman who grew up on the medieval streets of Kelmar as a thief, has learned something terrible. The regime’s evil military ruler has learned the hideout location of the resistance she joined and ordered an all-out assault. Combined with the captain of the disbanded royal guard, a political prisoner, a duke’s daughter, and an old advisor, can her team rise to action and free Kelmar?

What listeners say about Darklight: A Coming of Age Fantasy

I found this to be fairly enjoyable...

I found this story to be fairly enjoyable... largely due to the narrator!  I felt that the beginning was a bit muddy, as we had several different POV's and flashbacks to contend with... but, once we got past that, the narrative got down to business of carrying us to the ending. Greg L Turnquist also presented us with a unique magic system in this world, which I'm sure will be further explored, as we progress into the series...
Starla Huchton was great! her narration and acting was stellar as she navigated through that tricky beginning with aplomb...

The character who is coming of age in this fantasy is a young thief by the name of Snitch. I can only assume that is a nickname but the author never lets us in on anything more of her past. She's your typical ragamuffin with skills learned by living and surviving on the street. When we meet Snitch, she's already past that and living and working with a group of resistance fighters which means, of course, that we've missed some of her coming of age already.

The story then delves into the politics and intrigues of the city and the point of view jumps from character to character as we learn that the nobility has been overthrown by a military coup replacing the ruling class with a dictator that turns out to be more cruel and despotic than the King ever was... or so we're told.

If it had stayed that story, I would have tuned out long before then end. Honestly, the only reason I kept listening was the narrator. I enjoy listening to Starla Huchton and she didn't disappoint here. And I'm glad I continued to listen because things took a turn for the weird and bizarre when suddenly Snitch and a odd old man are thrown into another world and she has to deal with the fact that magic exists and she may just have the ability to use it.

And thus the coming of age is about Snitch finding her way with magic. To say more would be to give away the very interesting world that Turnquist has built here.

The story does wrap up far too many things neatly by the end but presents the listener with a whole lot more questions than answers. Questions that I can only suppose will be answered in subsequent installments of this series. For instance, what is Snitch's real name? I really want to know.

Overall, I enjoyed the second half of this book far more than the first half and I enjoyed it enough to want to hear more of the story.

Turnquist has created a fascinating universe that includes a purple dimension, magic, political intrigue and unrest, and monsters both human and inhuman.

This book was a bit tough to get into at first. I was confused by all the point of view changes but the moment magic showed up, I was hooked. Stick it out for the first few chapters and get to know the characters.

This is definitely a coming of age story for the main character, Snitch. I look forward to what she will do in the future.

This book was given to me for free at my request through Audiobook Boom and I provided this voluntary review.

Snitch, a strong but tormented young woman, now a turned thief, is now being hunted as a member of the resistance by the evil ruler of their land, Kelmar. Can she stop them in time?

Intriguing series, I'm drawn into this world and am looking forward to listening to more in the series.
Narration really brought the story to life, I enjoyed from beginning to end :) Great start to a new series!

I enjoyed both the story and Ms. Hucton’s telling of it. The characters had good depth and the story was interesting and keep me wanting to come back and listen for more. I enjoyed the concepts of different “colors” of magic. The end may have wrapped up a little too neatly, but overall it was an enjoyable listen.

I requested and received a free copy of this book and voluntarily provide this review.

ok... the story wasn't a bad story... it evem was good but I did exspacted somthing more
the narrator did an A M A Z I N G work... I think tha narrator made this story from an ok story to an incredble one
I was given this free review copy audiobook at my request and have voluntarily left this review.

A floater of a girl finds her purpose.

A narrator can take a book to the next level, making it more enjoyable than reading words. Starla has done that here! The story is simple, but Starla breaths life into it with each word. She adds heart, emotion, and life to the characters with tone, innuendos, and accents. The narration is clear and clean while listening to it. I enjoyed listening to Starla bring the story to life.

Did you ever read a book and feel there's no desire in the characters? They seem to have no need for something. Well, I got that feeling here in the beginning of the book. I know the characters in the resistance are trying to live and those in the army under Melicose want to capture the resistance to rule on. But there doesn't seem to be any other drive than living, which we all want to live but it doesn't feel strong enough to back the story. But we get more in the end. Melicose's goal. And direction for Snitch.

I think Snitch is a character that's a floater, not sure where she's to be in the world. Snitch feels to not have a drive for anything until the end, which would likely carry on through future books. In the end, she finds what she should do and a mission to follow. It was a bit touchy for a while with Snitch as she felt to have no direction for me, but in the end she came together. And there are a few other important characters we see grow in the story.

The story is told from different character point of views. You easily know which character you are hearing from because they are clearly mentioned as the section starts to make you aware. This is very important in a story this vast. There are different things happening at the same time that are related. And there are groups that get separated, so to keep up with each set of events this is needed.

We come across some very interesting things here. There is a magic present, though it's limited to one or two people we are aware of. There is an extremely good reason for this, as it could draw a new danger and enemy to the world. And there is already enough problems in the world with Melicose.

I liked the twist of magic and technology here. It's interesting to see the two in a world that feels to be of a fantasy setting. There is a history to both, and we start to get details on the magic side here but not as much with the technology side. We know there is potential for technology here, but it's hidden.

The story was interesting, and seeing it all play together was nice. I'd be curious to see where the author goes in the next book.

The story is good, and the characters are interesting, but the real star of this book is the world. The description says it's a Medieval world, but I really didn't pick up on that until much later into the book because it doesn't rely on the stereotypes and tropes of many books that have a similar inspiration for their worlds. It's unique, complex, and I love it.

Starla Hutchins does an amazing job narrating as usual. Her narration adds so much to the story.

You will really enjoy this tale. So looking forward to listening to future releases.. There's adventure, intrigue, discoveries and great characters. The narrator is so versatile, her characters are realistic. and her voice is clear.
This audio was given to me free and I voluntarily gave this review.

Promising beginning to this series

Any time you get a book proudly declaring it is book 1, it is only natural to be slightly concerned about how well it will work as a standalone book, but this one has a good balance between the two aspects. In some ways thought it could have maybe done being a bit longer, the path from nobody to chosen one went by very quickly for the main character, the ending was also tied up rather quickly and a little too neatly if anything.

Even with these slight flaws, the author has a nice blend of styles for the world with a post-apocalyptic world that has reverted back to pre-industrial times for the most part along with a more mysterious magical realm that contains a larger and more existential threat that you suspect will feature more prominently in later books while the more mundane military leader provides a more grounded threat for our fledgling chosen one hero, Snitch.

The narrator had a likeable tone overall and managed to be distinctive enough that a fairly wide cast of characters could still be readily distinguished from each other during her performance that served to enhance the book quite nicely.

Overall, the path to the chosen one could have been better paced, but the overall story was an enjoyable one in its own right and also a good book one too.