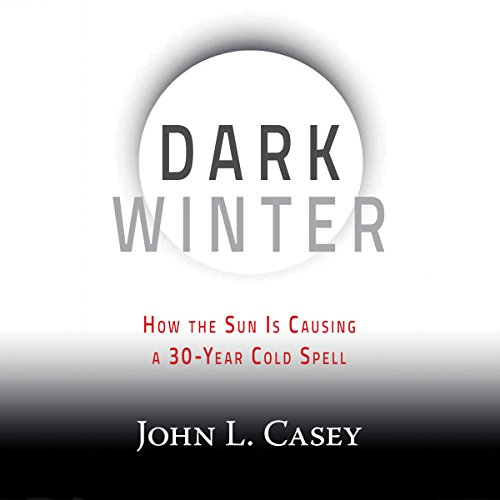 Climate change has been a perplexing problem for years. Casey's research into the Sun's activity, which began almost a decade ago, resulted in discovery of a solar cycle that is now reversing from its global warming phase to that of dangerous global cooling for the next 30 years or more. This new cold climate will dramatically impact the world's citizens. A sobering look at Earth's future, Dark Winter predicts worldwide, crop-destroying cold; food shortages and riots in the United States and abroad; significant global loss of life; and social, political, and economic upheaval.

What listeners say about Dark Winter

I did not expect anything less from John L Casey it's really unfortunate that he had a stroke but I've been in communication with one of his associates Oppenheimer Ranch project and he said that his recovery is going really good, I wish him well he's definitely in my thoughts everyday

Global Warming Is A Hoax

Could You Please Send A Free Copy To Al Gore And Barack Hussein Obama !

You can watch all of the same content on YouTube interviews, and they are more concise and up to date.

chock full of facts.. replayed quite a few parts

chock full of facts.. replayed quite a few parts to catch all the information.. intriguing.

Very enlightening read of the potential for global cooling period in the very near future.

No surprises about our media and cancel culture here… nowadays no one likes the thinking man.. Great presentation.

What Casey has done is to coin a critical name to simply explain what the sun is doing effectively he has created a meme on the subject of climate change, and for that we all need to be thankful.

This book was written several years ago before any record cold temperatures took place. Yet, this past winter (2018-2019) reached record lows in the northeastern United States. Even if he turns out to be wrong in the long run, at least he’s standing up to the powers that be and is telling us to be prepared- which is always a good idea.

This knowledge can save your life.

Since this book was written, many viable sources have surfaced, providing updated data sets affirming the immenant 400 yr Solar Minimum cycle which has already begun.
On YouTube find: Ice Age Farmer, Oppenheimer Ranch, Adapt 2030, Lee Wheelbarger, including John Casey himself. Great Book! And this knowledge is crucial in planning for your future and that of your family's.

I highly recommend this read for those who want to broaden their views on climate change. Compelling

This book blows the lid off the nationally funded myth that is 'global warming' aka climate change. You'll soon change your mind about man made control of the climate when you give the truly scientific basis for Casey's assertions and predictions a chance. You'll wonder how they ever pulled off the biggest deception in history after you've had this brief insight into the science behind the propaganda and lies. I mean who would have guessed it.. the Sun rules our changing climate, not mankind !?

It is rigorously scientific tinged with some humour whilst trying to tackle the most important and impending crisis of our time. It tries to convey some of the detail which lead to the greatest swindle of the modern age. It warrants everyone's utmost attention to ensure a change in the public perception of what we currently understand and can trust. The IPCC and our own elected officials would have you believe global temperatures could rise as much as a couple of degrees by the end of the century. Casey exposes the reality that is - he believes we face prolonged cooling on a global scale of many degrees, not in the next 100 years, but in the next decade. I am certainly convinced and believe him entirely. If you immerse yourself in global reporting, you'll know it's already begun!

May be it’s too easy to criticise someone who does narration for someone else’s book. Professional they my purport to be, but bottom line is the publisher will have been responsible for choosing them. Sadly, from the outset, he fails to invigorate the subject for me, which personally has already changed my approach to life and what the future likely holds. Any intonation he does give soon wanes, suggesting the narrator is simply long in the tooth. He does improve, but still, they chose this guy!?

I would have perhaps if they had chosen David Dubyne to read it instead, who possesses far more passion on the subject. It’s not a work of fiction, and science isn’t the easiest topic to entice people to read, so whilst it is intended to be more about the content than the story telling, it is hugely dramatic and exciting with its alarming revelations. Yet, I can’t help thinking people may fail to engage with the topic on the basis the narrator did not convey it with enough exuberance to reflect the interest and urgent attention this book richly deserves.

This book is arguably the most important book you will ever read so bare with it, as it has implications and predictions you yourself and your family and friends will inevitably have to face in the not too distant future. you will never look at the world quite the same again, and not before time! I would also highly recommend David Archibald's 'Twighlight of Abundance' and Tim Ball's 'The Deliberate Corruption of Climate science' although the latter is sadly not available in audio format that I am aware of.

It repits and repits the same all the time.
Don’t have any cientif back grond