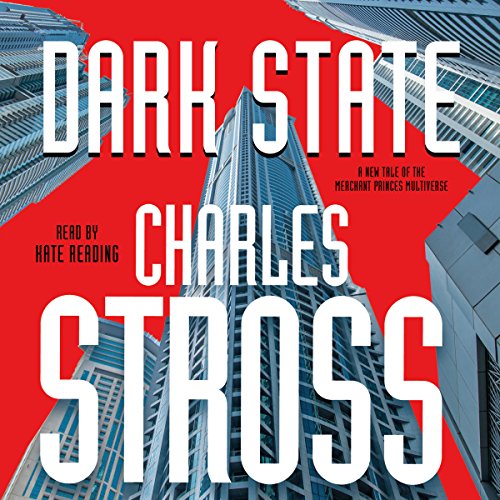 By: Charles Stross
Narrated by: Kate Reading
Try for $0.00

Dark State ups the ante on the already volatile situations laid out in the sleek techno-thriller Empire Games, the start to Stross' new story-line and a perfect entry point for new listeners, in The Merchant Princes series. In the near-future, the collision of two nuclear superpowers across timelines, one in the midst of a technological revolution and the other a hyper-police state, is imminent. In Commissioner Miriam Burgeson's timeline, her top level agents run a high risk extraction of a major political player. Meanwhile, a sleeper cell activated in Rita's, the Commissioner's adopted daughter and newly-minted spy, timeline threatens to unravel everything.With a penchant for intricate world-building and an uncanny ability to realize alternate history and technological speculation, Stross' prose will captivate listeners who like hi-tech thrillers, inter-dimensional political intrigue, and espionage.

What listeners say about Dark State

Good story when it was sometimes told.

The history book of a made up a world was boring. The author might have picked a few of the too many great characters and show them to us. Reading was great as usual.

Love Charles stress but where is the humor?

Love the detail and the character build, technically interesting and less fun.

Good luck for the next one.

After a so so start of the continuation of this series through Empire Games, this book really delivers. Alternate history lovers, this series is it...!

Excellent continuation of the story. Can't wait for Invisible Sun and some more details about the forerunners.