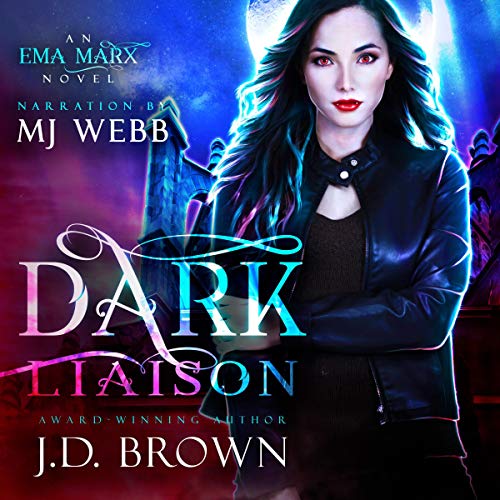 Ema Marx has her work cut out for her after accidentally unleashing the evilest creature in history. Their imminent battle has been foretold, but Ema must hone her powers if she's going to have a snowball's chance in hell of winning.

Luckily, Ema meets an elite trainer named Bridget, but in the vampire world people are rarely who they seem. To save her new friends, Ema dives head-first into an alliance with the Alpan King, but she may be giving up more than she bargained for.

What listeners say about Dark Liaison

The second book is no less gripping and exciting than the first. Secrets continue to run rampant and the mystery deepens as things shift and change.

The narrator does it again with incredible skill. Her inflection and the emotion with which she narrates is phenomenal!

MJ Webb’s theater background shines through as she not only reads the story but gives each character life. Looking forward to the continuation of this series.


I adored Dark heirloom so much. But I struggled a bit to get into Dark Liaison. It felt like a slow start and I found myself having to take lots of breaks.

I think my biggest issue was Maria’s POV this time around. I wasn’t invested in her as a character and I was just eager to get through her chapters and back to Emma.

Speaking of Emma, YES PLEASE. I really loved her character development through this book. While she has a few cringe worth moments, she really just kicked butt in this book.
Call me a hopeless romantic but FINALLY🔥 I was patiently waiting and waiting. Thank goodness it happened. But that cliffhanger 🧗‍♀️

I can’t wait to listen to the next one.

I usually do a mix of listening and reading. I listened to Dark heirloom and Dark Liaison. Both read by MJ Webb and yes girl. As usual, her accent is on point. She really brings the characters to life, even the males.
She’s a must watch narrator and I can’t wait the hear more.

I listened to Dark Heirloom back when it was released and it was my first audiobook experience. While there wasn't anything that bothered me too much, the production on Dark Liaison is so much better.

Again, MJ Webb brings to life the characters of this book. She's done an amazing job giving each character a different sound, cadence, and personality.

Sarah is, by far, my favorite character in this installment. Her quirkiness and demeanor is endearing to me. I hope that her character gets explored more later in the series.

My one complaint in the book is the cliffhanger. While I get the purpose of a cliffhanger, I personally don't appreciate them. Especially not in an epilogue.

Other than that, I enjoyed the listen and a few of the hot and steamy scenes to pass the time on my commute. ;)

Leaves Me Wanting More... In The Best Possible Way

I’m always curious how books in series progress. I LOVED the first book in the Ema Marx series. I can happily say that “Dark Liaison” did not disappointment. The story continues with even more history/back story of vampires. The story has more development with the characters and some things even get STEAMY. *insert smirking emoji here*

The only thing I found about the story was that it seemed a little slow with the plot moving forward/gaining momentum. I did find myself wondering when the story would pick up. Thankfully, that wondering was answered about 2/3-3/4 of the way through and it kept me hooked! There are even some cliffhanger moments (no spoilers here) and I can’t wait to see how the series progresses.

I love the narration and her ability to switch between the characters. Even with the introduction of new characters with different accents. I was never confused with which character was speaking. The narration/audio improved from the first book and there was no weird white noise between chapters like in the first book.

All in all, I really enjoy this series and I can’t wait for book 3 to become available on Audible!

Can't Get Enough Of This Story!!

This storyline just gets better and more compelling with each syllable MJ Webb releases with her breathy angst and passion narrating the amazingly intricate world created by JD Brown. I'm still flabbergasted as to how someone can bring together such a complex fully working sub-culture of beings and with just a few cleverly thrown in words make me, a grown up 47 year old, question whether there is a golden thread of truth in this book!!!

But I digress... This book picks up immediately from the excellent book 1, Dark Heirloom, and speeds the reader deeper into the world of Vampires, Shape Shifters and other paranormal entities you never knew might exist. Using historical references makes the story relevant to the reader but also makes the reader feel as though they own parts of the storyline, in a strange way!

Again for this book MJ Webb creates the most sensual voice for each character. For this book she brings a hard edged human innocence to Ema Marx whilst the centuries old beings have aged voices that are velvety soft and wrap around the readers and draws them into the scenes playing out in the book, even the ones they shouldn't be getting intimately involved in!

If book 1 was good and book 2 was great, I can't wait to see what JD Brown does in book three and I definitely can't wait to hear MJ Webb read it to me.

I received a free copy of this audiobook from the author and provide my honest review voluntarily.