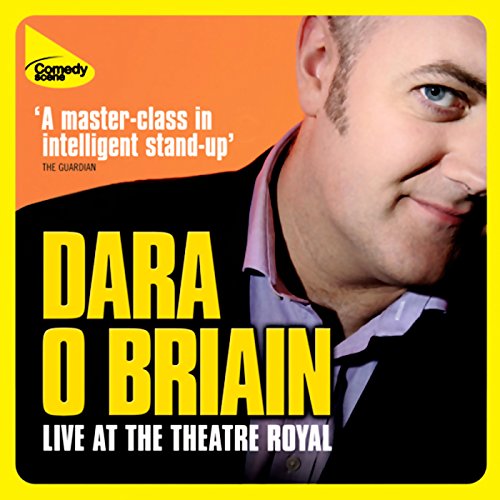 Following the huge success of his sell-out 100-date UK stand-up tour, Dara O'Briain Live at the Theatre Royal marks the explosive finale to the run. Recorded in front of 2,500 fans at the Theatre Royal Drury Lane, this show has Dara at the very top of his game, musing on subjects as diverse as driving tests, baguettes, and the Milky Bar Kid.
©2006 Universal Studios (P)2006 Universal Studios
Arts & Entertainment
Show more Show less

What listeners say about Dara O'Briain Live at the Theatre Royal

What did you love best about Dara O'Briain Live at the Theatre Royal?

Whimsical look at universally shared experiences, giving a brilliant take on the true
previously unexpressed thoughts we have all had.

Actually, my favorite comedian, edging out Steven Wright, the previous title holder. His routine here is among his best, and it will be the rare audiobook that I'll listen to repeatedly.

It doesn't hurt that Dara is a skeptic, grounded in reality. His back and forth with the audience and sharp observations about culture are noteworthy. The only two drawbacks are that, as an American, there are some references that I just don't get, and that I may never get to see him in person. Every possible thumb up.

I listened to this while I was on a treadmill in the gym. A friend told me afterwards that people had been watching at me because my facial expressions and inability to control my laughter made be look and sound like some kind of maniac!

superb. well worth a listen

Daire is one of my favourite Irish comedians and his 'Live At the Theatre Royal' doesn't dissapoint. Worth downloading just for the anecdote about the train museum in Bolton. Classic O'Briain at his best.

Very amusing , again ended up chuckling out loud while listening to this at work and looking particularly loopy. Definitely worth a listen if you enjoy stand up.

I love the quick fire, intelligent comedy that Dara always brings to his shows and this one is no exception. A great pick-you-up when you need to laugh at yourself.

we enjoyed this so much, we listened to it again. and will probably again later down the line. superb stuff.

I've seen the guy live, I've got him on tape.
I just listen to him most nights in bed for 15-20 minutes

Would you consider the audio edition of Dara O'Briain Live at the Theatre Royal to be better than the print version?

Definitely is all about timing. Not For the sensitive or easily offended though.

I wasn't sure what this would be like as I had only seen Dara on Mock the Week. I wasn't disappointed. Absolutely side-splitting stuff! I was listening to this on my ipod on the bus home and needless to say I encountered a few strange looks when I involuntarily laughed out loud! Really great!

O'Brian is a great observational comedian.
The only reason he didn't get 5 stars is that there a couple of visual comedy moments which you just cant get with audio.