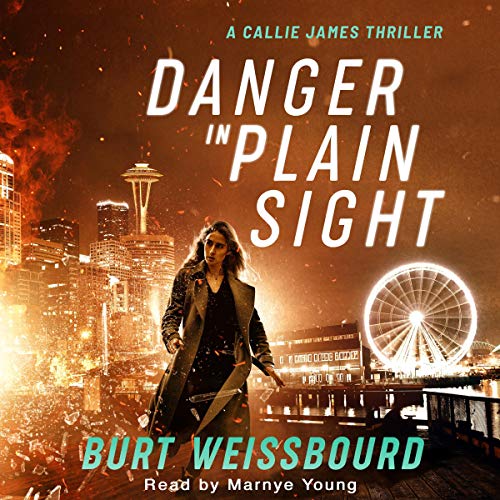 By: Burt Weissbourd
Narrated by: Marnye Young
Try for $0.00

It took 14 years to construct a safe world for her and her son - and only one night for her ex to unravel it.

Celebrated Seattle restaurateur Callie James is more than a little thrown when her ex-husband, French investigative reporter Daniel Odile-Grand, shows up after 14 years asking for her help. Even more disturbing: As she throws him out, Daniel is deliberately hit by a car, hurled through the front window of her restaurant - broken, bloody, and unconscious. He flees from the hospital and breaks into Callie’s apartment, where he passes out. Reluctantly, Callie hides him. When she gets back to her restaurant, two assassins walk in, insisting that she find Daniel for them by tonight or pay the consequences.

Overwhelmed and hopelessly out of her depth, Callie hires the only man she knows who can help her: Cash Logan, her former bartender, a man she had arrested for smuggling ivory through her restaurant two years earlier, and who still hasn’t forgiven her.

The assassins blow up her restaurant. It’s Callie’s nightmare. And the worst is yet to come as she and her unlikely, incompatible ally discover that the most perilous dangers are far closer to home than they’d imagined.

What listeners say about Danger in Plain Sight

I loved Danger in Plain Sight! It is one of my favorite reads and I’ve been a member of audible since 2012.
If you like character-driven stories with a rich and exciting plot, please take a chance on this book.

The narrator is one of the best and added to the rhythm of the story. I actually had a hard time turning it off to do some work!

I absolutely adored this audiobook! This is my first time with a Burt Weissbourd audiobook, and I will definitely be coming back for more. Marnye's narration is so mesmerizing that I simply couldn't stop listening. I love her voice! AND this story was killer. This new thriller is a heart-grabbing page-turner (or headphone-magnet, I suppose!) full of unexpected characters and high voltage action. Totally recommend!

I absolutely love it! This book caught my attention from the very beginning and held it throughout the entire book. This book was full of action, drama and suspense! The narration was outstanding and gave the story that extra flair! It will keep you entertained! The author did an amazing job with the character builds and plot! This was my first book by this author but definitely not my last! I look forward to reading more books from this author! I was given this free review copy audiobook at my request and have voluntarily left this review.

This ended up being such a good story. The characters were very likable. I know I was rooting for Callie and Cash the whole time. I found the ex-hubby really funny too. The narrator was fantastic. I loved the accent! Easy to understand, yet very French. I would love to listen to the rest of Callie James' story! I highly recommend this!

As a representative of AudioBookReviewer.com here is a review on Danger in Plain Sight: A Callie James Thriller written by Burt Weissbourd and narrated by Marnye Young.

Danger in Plain Sight opens by introducing us to Callie. A restaurateur who built a safe life for her and her son. After years without contact, her ex, Daniel, re-appears and turns her safe life upside down. Daniel is being hunted and Callie hides him after being hospitalized. She then turns to the one man who she thinks can help; her former bartender, Cash Logan. With some bad history between them, Cash and Callie come together as best they can to attempt to save Daniel and expose the truth.

One of the best parts of the book are the characters. They pull you in and have you feeling hate or love for each one. They moved with the story and did not linger more than necessary. In the end, you are left wanting more from this group. The author did a great job with character development and moving the story forward. There are plenty of twists and turns in this fast-paced book. I highly recommend this audiobook.

The narrator, Marnye Young, did a great job with this reading and changing the characters voices. She was very expressive, and her voice was magnetic. She had a good pace and her rhythm was solid.
Overall, I really enjoyed this audiobook. I found myself thinking about the book at times that I was unable to listen. I look forward to hearing more by Burt Weissbourd and hearing Marnye Young. Together they make a powerful team.
Disclaimer: This Audiobook was provided free of charge by the author, narrator, and/or publisher in exchange for a non-bias, honest review.

What an excellent story! WOW!

Danger in Plain Sight, A Callie James Thriller by Burt Weissbourd, was absolutely wonderful and unexpected. It's not often that I get a chance to review books that are so solidly thought out and put together. There are an array of characters, but this book mainly revolves around Callie James, her arrogant ex-husband Daniel that just appears at her restaurant unexpectedly one day, with total chaos ensuing, and Cash, a man that Callie calls upon to help her out of this huge mess that she's found herself in. I don't want to give anything away, but the summary sums things up pretty well. This story is a rollercoaster of action, intrigue, bad guys, etc and I couldn't listen to it fast enough. I'm definitely looking forward to more Callie James books and I highly recommend this book!

Marnye Young did a great job narrating this story and handled all of the various characters with their accents and whatnot, beautifully. Her narration kept me engaged and I'd definitely listen to more stories narrated by her. I was voluntarily provided this free review copy audiobook by the author, narrator, or publisher for an honest review. Did you find this review helpful? If so, would you please take a moment and select the 'helpful' button below? Thanks so much!

Dynamic characters, compelling story driven by character development rather than forceful plot and thrills, and action-packed! So cons? Lots of characters can get overwhelming, especially when names are similar (ie Allen and Adam). The narrator wasn't the best, but certainly not the worst for a thriller. She gave Callie a voice for sure, but fell flat for the other characters' tones. My other gripe is how unnecessarily descriptive everything was. It sure did paint some vivid imagery, but lots of descriptive words in a thriller kind of drag everything out and slow down the pace. Finally, personally, I couldn't connect with Callie, the main character. There was something about her "saintly" vibes, always wanting to do the right thing, that bothered me. But, again, that's a personal flaw of my own.

I was blown away by this book. The characters were all unique, the story moved at a great clip, and there was just enough intrigue to keep pulling you through. The writing was dynamic and compelling. I was thoroughly impressed. I would recommend this book, and I won't hesitate to purchase his future works.

Action-packed and hard to put down!

This is a really well executed first book in the Callie James series with fantastic narration that made the experience of reading so much more captivating.

I would highly recommend if you love character driven thrillers with a lot of action and drama. I did switch between the audiobook and a physical copy but the audiobook was my favourite. It was so easy to get drawn into the story and really hard to stop listening!

This audiobook was kindly gifted to me by the author in exchange for an honest review.