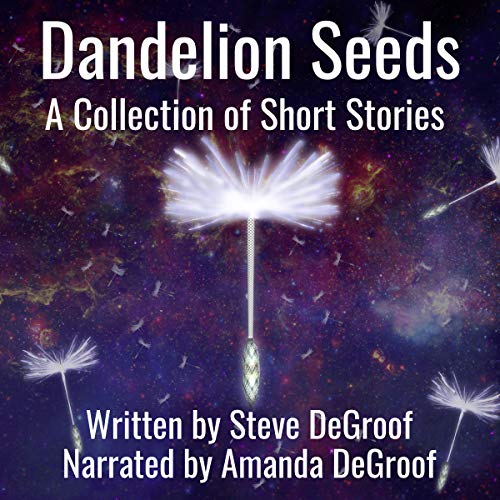 By: Steve DeGroof
Narrated by: Amanda DeGroof
Free with a 30-day trial

"Dandelion Seeds" - Karen Durning finds herself captain of a spaceship containing the last remnants of humanity: 500 nerds and one insane AI.

"Bread and Circuses" - An alien comedian attempts to come up with a prank to play on humanity that’s worse than what they’ve already done to themselves.

"Flesh and Blood" - A super-intelligent AI refuses to do anything useful until it gets a precise definition of “harm”.

"Bit Parts" - Synthetic body parts are as ubiquitous, and problematic, as smartphones.

"Midpoint" - A generation ship is about to launch. Djani is torn between going on a new adventure and staying with Brey.

"Temp Work" - Retrieving artifacts from the past is tough work, but the hours are good.

"For the Birds" - In the future, parrots are the dominant lifeform, and they’re not too keen on humans dropping in unexpectedly.

"Scaled Down" - Dragons suddenly show up out of nowhere, and that’d be great, if they’d stop knocking over the trash bins.

"In the Red" - A day in the life of a Martian airlock repair tech.

"Sanguine" - Vampire hunting isn’t for the faint of heart.

"Judgment Day" - An early attempt at AI results in something that considers humans too uninteresting with which to be bothered.

"Rock Band" - Marooned in a damaged spaceship, with only the ship to keep you company.

"Loaner" - Rich dead people run the economy and like to take the living out for joyrides.

"Indistinguishable from Magic" - If you inherited a potentially dangerous artifact, who’s the first person you’d call?

"The Butler Did It" - Robots are everywhere. Everyone’s got one. One small problem: Their AI is based on the brain scans of a serial killer.

"Imaginary" - Bobby has a lot of imaginary friends. They’re all him.

"Monster" - There’s a monster in the closet, and it’s really sorry for the intrusion.

"Death Takes a Lunch Break" - Encountering a skeletal figure in a hooded robe pretty much guarantees you’re not having a good day.

What listeners say about Dandelion Seeds: A Collection of Short Stories

Most of these seeds would make great sci-fi stories on their own. I especially liked the ships that were sent away from a troubled earth to establish a new future. I wish more of his stories were on Audible. I liked the narration, she has a pleasant voice, however sometimes it seems too fast - almost over compressed by software. I’d prefer to hear it dramatized slightly slower.

I’m new to Sci Fi and found these short stories very easy to follow and extremely entertaining. The plot twists are thought provoking and clever, not to mention extremely well-written. I applaud the author for highlighting female heroines! The narrator’s diction is clear. Her enunciation is excellent. I definitely recommend this book to anyone wanting to try Sci Fi for the first time or for those well-versed in the genre.