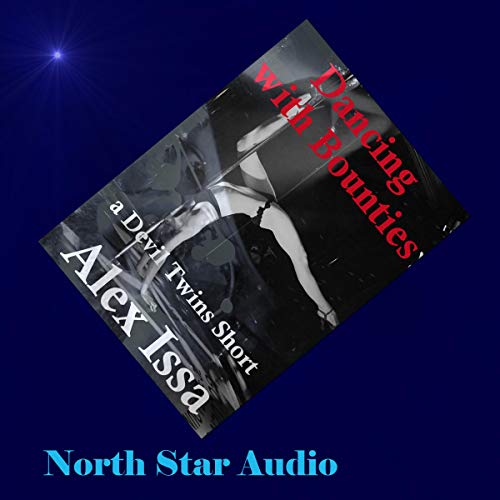 Dancing with Bounties: A Tale of Afterward

Dancing with Bounties: A Tale of Afterward

By: Alex Issa
Narrated by: Chris Koprowski
Free with a 30-day trial

The Blank Twins, violent bounty hunters, hired usually for their particular ability to forget the “Alive” part of “Wanted: Dead or Alive”, lie in wait for a serial killer with 19 brutal rapes and murders to his name. Dark, violent, and strangely comic, the unforgettable and more than a little disturbing world of Alex Issa is sure to please. This thriller short story is one of many in the Devil Twins series.

Barton simply downed his whiskey shot and poured another quietly.

“Hard to think he really killed nineteen men.” Michael added quickly around the beer swilling through his lips.

“So you finally read the…"

“F--king you go read it.” Michael spat out. “Everyone’s been talking about what that kid’s done.”

Barton stared at the young man who was laughing girlishly and flirting with the waitress while still keeping time with his hips to the music. “Seems like it fits him perfectly.” He said quietly.

“Fitting or not how do you want to do this.”

“It’s still early, there’s no need to out and out shoot him right now.

Besides...” Barton said while lifting his shot glass in a salute the direction of their bounty. “I think I want to talk to him first.”

What listeners say about Dancing with Bounties: A Tale of Afterward