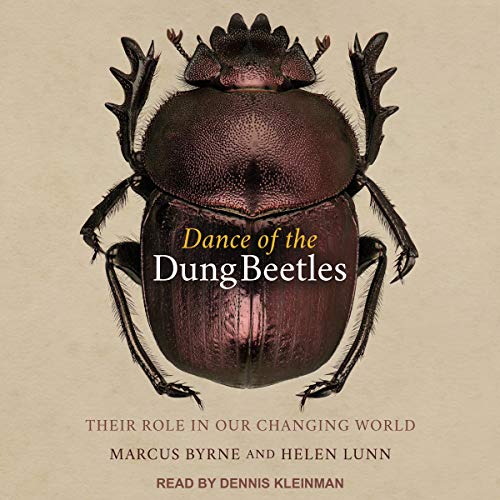 Dance of the Dung Beetles

By: Marcus Byrne,Helen Lunn
Narrated by: Dennis Kleinman
Try for $0.00

The sweeping scientific and social history of the humble dung beetle.

In this sweeping history of more than 3,000 years, beginning with ancient Egypt, scientist Marcus Byrne and writer Helen Lunn capture the diversity of dung beetles and their unique behavior patterns. Dung beetles' fortunes have followed the shifts from a world dominated by a religion that symbolically incorporated them into some of its key concepts of rebirth, to a world in which science has largely separated itself from religion and alchemy. With more than 6,000 species found throughout the world, these unassuming but remarkable creatures are fundamental to some of humanity's most cherished beliefs and have been ever-present in religion, art, literature, science, and the environment. They are at the center of current gene research, play an important role in keeping our planet healthy, and some nocturnal dung beetles have been found to navigate by the starry skies. Outlining the development of science from the point of view of the humble dung beetle is what makes this charming story of immense interest to general listeners and entomologists alike.

What listeners say about Dance of the Dung Beetles

an interesting insight into a bug's life

Entomology is my least favorite biological science. This book somehow captured my imagination, regardless. I thoroughly enjoyed this title, coming from the perspective of a budding ecologist.

The author takes you thrrough a wide variety of dung beetles and their interactions with wildlife and mankind. He discusses evolution of many organisms and ties them together with other organisms. He tells of adaptations in dung beetles, how some use the daytime sky and others use the Milky Way for navigating, how some are generalists and others specialize on the dung of a specific animal species. This is is a very intriguing and thought provoking look at dung beetles and the immense effect they make on our planet.