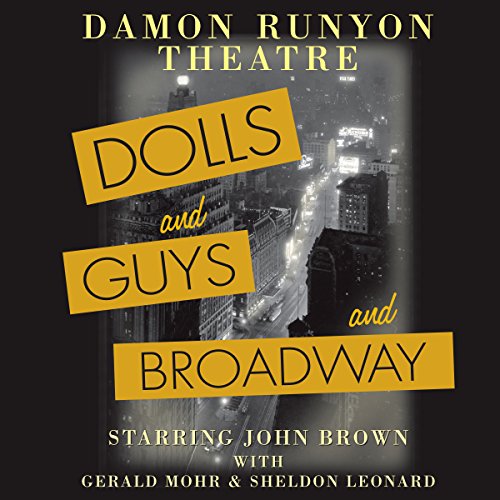 By: Damon Runyon,Russell Hughes
Narrated by: John Brown
Try for $0.00

For gamblers, burlesque queens, murderers and innocents, comedy and tragedy were found in equal measure on the streets of Damon Runyon's Manhattan. Runyon, one of the most popular and widely-read figures of the Golden Age of the American Short Story, found his work was cut to measure for success in the most verbal medium of all: Radio drama. John Brown stars as the glib Broadway, whose scene-setting brings a distinctive unifying touch to these fourteen digitally remastered episodes of the classic Damon Runyon Theatre radio series. He takes you aside and lets you in on his stylized tales of guys and dolls, scams and swindles - all wrapped up in one of the most distinctively colorful dialects ever concocted. Join him on a tour of his bustling, loud-mouthed, high-rolling town, full of flamboyant sportsmen willing to bet on anything. Features adaptations of the famous short stories that were later used as the basis for various productions of Guys and Dolls in movies and on stage.

What listeners say about Damon Runyon Theatre: Dolls and Guys and Broadway

I adore this series.

I'm so grateful audible has old radio classics. They represent some of the greatest writers in American entertainment.

Would you consider the audio edition of Damon Runyon Theatre: Dolls and Guys and Broadway to be better than the print version?

Although the print versions of Damon Runyon's tales of Broadway are longer and the characters are more fully realized,these audio radio programs are delightful and made me want to re-read the books.

What other book might you compare Damon Runyon Theatre: Dolls and Guys and Broadway to, and why?

Pretty much anything by Jimmy Breslin, especially 'The Gang That Couldn't Shoot Straight' and 'Can't Anybody Here Play This Game?'. Breslin's style is much like Runyon's and his characters are the same types.

I love 'The Idyll of Miss Sarah Brown', because it's the story that led to 'Guys and Dolls'.

Well, 'moved' isn't an apt word to use in connection with a Damon Runyon story, but 'Butch Minds the Baby' is quite sweet,

These radio plays are a great way to pass a half an hour or so, or more...they lead to 'Oh, I'll just listen to one more....'

What disappointed you about Damon Runyon Theatre: Dolls and Guys and Broadway?

The attraction in Runyon's stories is largely his use of the first person mode of presentation. This means the narrator has no name. In this version, a name is invented, a dialogue between various voices is introduced some of which made me cringe. However. all this pales before the format which introduces frequent interruptions (were these for commercials in the original soundtrack?) which are quite irrelevant and destroy the flow
of the narrative.

Has Damon Runyon Theatre: Dolls and Guys and Broadway put you off other books in this genre?

Not necessarily, but listen before you buy.

He seemed not entirely happy with DR's slang

What character would you cut from Damon Runyon Theatre: Dolls and Guys and Broadway?

Eliminate all except the narrator