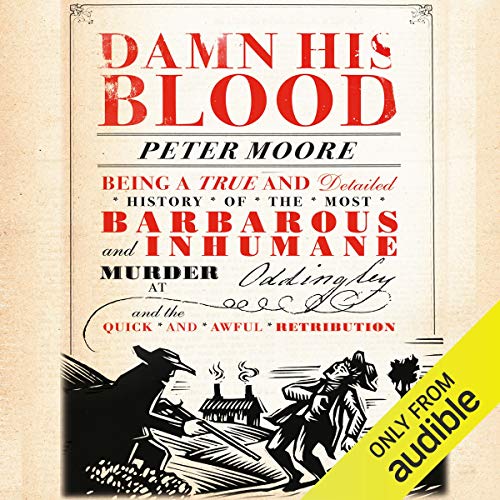 By: Peter Moore
Narrated by: Michael Maloney
Try for $0.00

The brutal murder of the Rev. George Parker in the rural village of Oddingley on Midsummer's Day in 1806 - shot and beaten to death, his body set on fire and left smouldering in his own glebe field - gripped everyone from the Home Secretary to newspapermen across the country. It was a strange and stubborn case. The investigation lasted 24 years and involved inquests, judges, and coroners, each more determined than the last to solve the gruesome crime.

Damn His Blood is a fascinating glimpse into English life at the start of the 19th century. England was exhausted and nervous: dogged by Pitt's war taxes, mounting inflation, and the lingering threat of a French invasion, violence was rife, particularly in rural communities where outsiders were regarded with deep suspicion. Damn His Blood is a nail-biting true story of brutality, greed, and ruthlessness, which brings an elusive society vividly back to life.

What listeners say about Damn His Blood

I am only halfway through this book. It is a wonderful book full of lifestyles on the early 19th century - quite a history lesson at the same time as being a fascinating account of a brutal murder.

This book is about a true story of a parson murdered in 1806 and the investigation into that murder. But it's so much more than that - it gives a really good insight into village life at that time and the tight bonds between villagers and the power employers had over their employees. The explanations of how investigations worked before police forces were established were really interesting. There was just the right amount of detail to give an authentic feel for the times but it never spoilt the telling of the main story, which was also fascinating.

lives up to the cover

The cover shows it all - historical crime, black deeds and thick red blood. It was recommended to me as an interesting portrait of rural life at the start of the nineteenth century, and it does indeed give a picture of a little-known world, the countryside just beginning to be affected by the changes of the revolutions, industrial and French (both are mentioned). The book is already on the melodramatic side, and this is intensified - in my opinion too much - by the eccentric reading. Hardly ever is the tone neutral, even for the most objective or mundane facts. Everything is menacing, given bizarre emphasis, playing to the full the possibilities of the book. If you can ignore the overemphasis, it's quite enjoyable and informative, and yes, there is plenty of plot!

As a general rule I enjoy crime stories and am also a keen historian so I thought this would hit the spot. A couple of hours in and I ceased to care who did or said what to whom... Not I think the authors fault, as he has done his best to convey the time and place, it was just the characters did not endear themselves to me. I'm afraid this is another one that I feel life is too short to waste my time finishing.

Absorbing tale of murder in a society on the cusp

This is a fascinating and immersive story of a murder in a society that is perhaps one step further removed than might be imagined.

Broadly speaking, historic true crime stories can suffer before - say - the Victorian period because there is no contemporary detective to unravel the mystery and precious little evidence for a modern investigator to rediscover in such a way that the reader may be given a compelling conclusion to the mystery. Critchley and James' 'The Maul and the Pear Tree: The Ratcliffe Highway Murders' deals with a similar time period and - though very well done - has this issue.

'Damn His Blood' does not suffer from that issue for reasons that I will not spoil the book by discussing here. It is particularly fascinating because the village society of the early 1800s is that much more alien, being - arguably - the last point that is more unlike us than similar to us (for example: tithes play a big part in this story). This may be a little off-putting to some but I found it very interesting and the author did a wonderful job of fleshing out the individuals and putting important points in context (the phrase in the title, for example, has a venom not immediately obvious to the modern reader). It is probably not a book that is great for listening to whilst doing other things, particularly when dealing with the later period.

The narration is excellent and - this is a rarely achieved and admirable quality in a narration - unobtrusive. Mr Maloney finds the voice of the book and never loses it.

A curious tale of Georgian England

I found myself engrossed in this sober and intelligent reading of the meticulously researched "Damn his Blood "
The narrative is carefully paced, interspersed with fascinating details of law, medicine and the " lost world " of agrarian England .
The inability of the key protagonists to compromise results in dreadful atrocity rather difficult to comprehend from a 21st century standpoint .An unfortunate coalescence of characters produces horror out of a more understandable frustration.The characters are all too human. The courtroom finale is truly gripping .Five Stars .

The story took place in a period I was not very familiar with so historically it was fascinating and educational.

Interesting but not great

This book was compared to the 'Suspicions of Mr Whicher', which I found an excellent book, and I don't think 'Damn his Blood' comes close. It could be just that you don't empathise as greatly with the people concerned or that there is no great twist in respect of the original murder. I just found it dragged a bit.

This story weaves the elements of brutal murder with the facts of the political and social landscape of the period and after.
Peter Moore brilliantly paints us word pictures with the skills of a master....
and the inimitable Michael Maloney sparkles as narrator....love it.......

An interesting and thoroughly researched story.

A great story that was a little difficult to keep up with in the beginning, due to the number of people involved and mentioned.

However, the story settles down and the main characters come alive.

The narration is clear and crisp.

All together, a thoroughly enjoyable book.