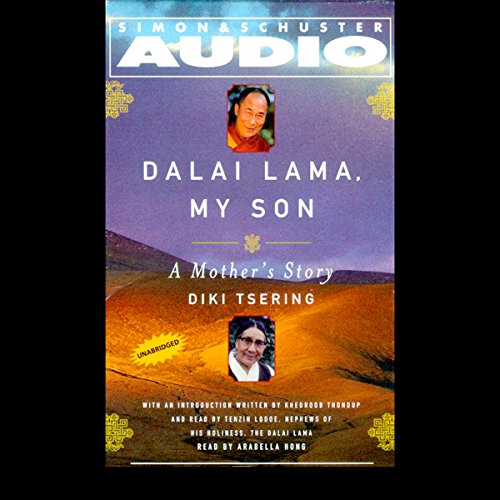 Born to humble but prosperous peasants in 1901, the Year of the Ox, Diki Tsering grew up a simple girl with a simple life and the ordinary ambition to be a good wife and mother. When faith and fate led her son Lhamo Dhondup to be recognized as the 14th Dalai Lama, her world altered completely.

In Dalai Lama, My Son she recounts her own amazing story from her early life with her "tended family and siblings" to the customs and rituals of old Tibet and her arranged marriage at age 16. She vividly recalls the births of her children and their Buddhist upbringing; His Holiness' unfolding personality; the visitors who came to her town to seek the new Dalai Lama; the family's arduous move to Lhasa; and the years there until the Chinese invasion of Tibet and the family's escape and eventual exile.

Rich in historic and cultural details, this moving glimpse into the origins of the Dalai Lama personalizes the history of the Tibetan people, the magic of their culture, the role of their women, and their ancient ideals of compassion, faith, and equanimity.