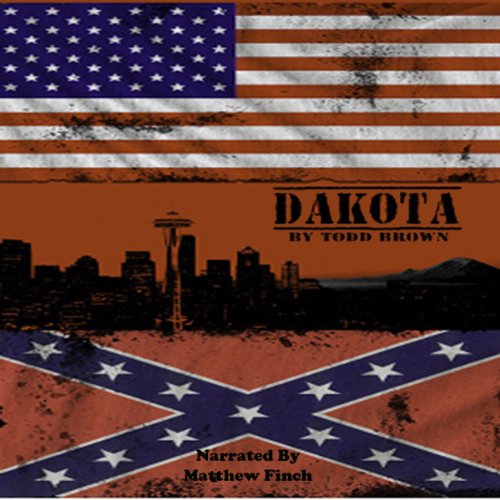 By: Todd Brown
Narrated by: Matthew Finch
Try for $0.00

Dakota Riley is a member of the Seattle Drug Task Force. During an investigation into an international drug smuggling ring, he loses his best friend and partner. To add insult to injury, he is assigned a rookie, Marc Bradley - the son of a black fisherman from South Carolina. Seeking revenge rather than justice, Dakota ditches the rookie...and almost gets himself killed. After leaving the hospital for a "forced" vacation, Dakota and Marc head to Marc's hometown of Charleston, South Carolina. A day out on a fishing boat goes wrong when a mysterious storm arrives. The boat is destroyed, and the two men wash ashore...in 1861, just prior to the start of the American Civil War.

What listeners say about Dakota

We're not in Kansas/Seattle anymore

Where does Dakota rank among all the audiobooks you’ve listened to so far?

I'm a fan if Mr. Browns Dead series. He is great at creating interesting and memorable characters. This story does not disappoint. There may not have been any zombies but it was not without it's threat from evil.

What other book might you compare Dakota to and why?

This book covers subject matter that I have not seen in any other books. So therefore I don't know what I would compare it to. However if you have read any of TW Brown's other books you will feel right at home with Dakota.

Which character – as performed by Matthew Finch – was your favorite?

There are some great characters in this story. Mathew Finch does a great job with all of them but I especially enjoyed the characters with the heaviest southern drawl, reminiscent of a "large cartoon rooster" (Foghorn Leghorn).

It was a very thought provoking story. I did chuckle a few times but mostly because of the accents & I live in the south

I was slightly disappointed with the ending. If this was the first book in a series, I would very much look forward to reading the second book. However being that there was no second book, I feel it left me wanting a little bit more of a climax. I was thinking it would be cool to learn that Aaron's last name was "King" (forefather to MLK), or if some character that was influenced by Dakota and Mark had gone on to make some greater mark on history, not that Dakota's contribution didn't.

....I suppose that time travel stories are always a bit tricky, but this effort was singularly amaturish. Once the two protagonists arrived in the 1860's the plot line became less and less engaging, the characters became wooden, one-dimensional and less than sympethetic, and the attempt at painting a picture of the times and places our heroes were moving through was so simplistic and frequently inaccurate as to make the skin crawl of any person knowledgable on the civil war period. Ironically, the prologue portion of the novel, where Dakota struggles in modern day Sesttle to bring down an arch criminal and through this bonds with his new partner, is rather interesting.

in my opinion your best Mr Brown.

while, when I got this book i thought it was something else. this book made me binge read. I could not put her down once I opened it. it was a depth of which I keep thinking about its characters. Dakota is one of my heroes right up there with tom Sawyer. he will stick with you in the worst and best times. his life is a testimony of never giving up. your best Todd.