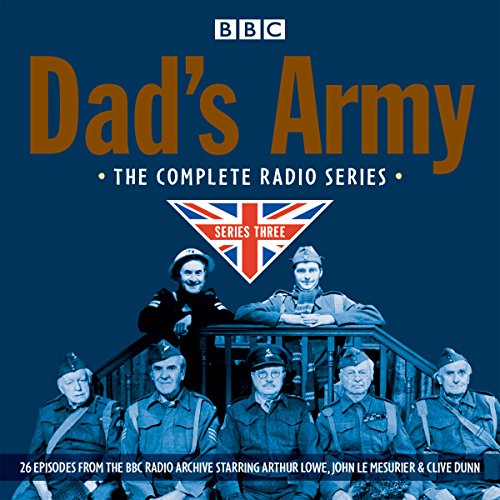 Here are 26 episodes from the third BBC Radio series starring Arthur Lowe, John Le Mesurier, and Clive Dunn, plus the pilot episode of It Sticks Out Half a Mile.

In 1973, the BBC adapted its hit wartime TV series for radio, featuring the original television cast and characters. Three series were broadcast between 1974 and 1976, with episodes adapted by Harold Snoad and Michael Knowles.

Now you can enjoy once again these unique recordings, with a supporting cast including John Laurie, Arnold Ridley and Ian Lavender.

Among the 26 episodes are "A Man of Action", "Keep Young and Beautiful", "Absent Friends", "The Deadly Attachment", "Things That Go Bump in the Night", "My British Buddy", "Asleep in the Deep", "Time on My Hands" and "Is There Honey Still for Tea"?

Also included is the 1981 pilot episode of the radio sequel to Dad's Army, It Sticks Out Half a Mile, starring Arthur Lowe and John Le Mesurier.

A delight - as expected!

Would you listen to Dad's Army: Complete Radio Series 3 again? Why?

Yes as its endlessly entertaining and provides light relief in a world of stress and awful news stories!

What was one of the most memorable moments of Dad's Army: Complete Radio Series 3?

The court scene when Arthur Lowe is defending his honour - accused of showing a light! He is shown to be a character of inner strength and integrity. Not just as a figure of fun.

Not really the reaction to Dad's Army -

Lovely to be able to hear all the familiar voices again and enjoy the whacky comments and situations they find themselves in.

Would you consider the audio edition of Dad's Army: Complete Radio Series 3 to be better than the print version?

This edition is a great add on to the Dad's Army army. It allowed me to have many of my favourite episodes with me on the move.

What was one of the most memorable moments of Dad's Army: Complete Radio Series 3?

The two original audio epsiodes 'A jumbo sized problem' and 'Ten seconds from now' are particular standouts. They are both well performed, and leave wishing that they had been filmed for the regular series.

All of it was a joy to listen to. There were no lulls and the inclusion of the first episode of 'It sticks out half a mile' was a treat too.

Well worth the money, and time invested into listening.

The bumbling captain Mainwaring at his best.

They certainly dont make them like this anymore. take a walk down memory lane and meet the home guard of Warmington on sea.
"Dont Panic" its easy listening.

More funny stories from our favourite army men.
Excellent as are the first n second ones

Careful when listening it made me laugh out loud embarrassing when your in a public place. If you loved the TV episodes you'll love this,

Bit bias here with my rating stars; but I am a self confessed Dads Army Junkie. The episodes are delightfully restored for digital listening, with all the sound effects and cock ups in clear stereo! A marvellous throw back to when humour did not have to reply on profanity or politics to get a laugh. A gem of a series for your collection my little bookworms.

BRILLIANT FUN TO LISTEN TO AGAIN AND FUNTASTASTIC.

ABSOLUTELY BRILL AND REAL FUN TO HEAR ALL THE OLF GUYS AND PIKEY BOY. EXCELLENT.

British comedy at its best. TV series never get tied of watching and the audio version very good.

Next best thing to actually watching on Television.Well worth a listen in my opinion.

Great until last one

I enjoyed this right up to the last episode. It sounded as though Arthur Lowe was totally drunk through the entire performance. It shouldn’t have been added in. It basically ruined the rest of it especially as it was the last one. Very disappointing. I would recommend the rest of them & the previous releases. They were all quite entertaining