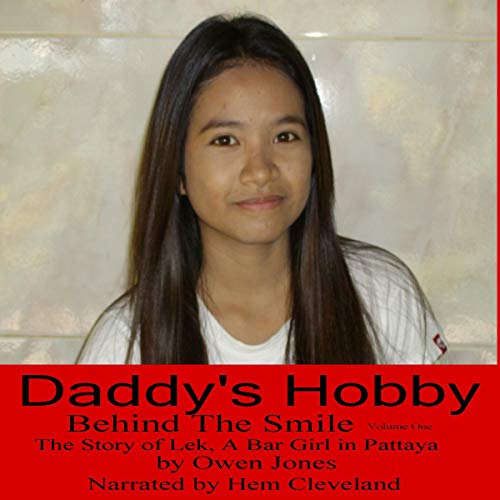 Behind the Smile - The Story of Lek, a Bar Girl in Pattaya, Volume 1
By: Owen Jones
Narrated by: Hem Cleveland
Series: Behind The Smile Series, Book 1
Length: 10 hrs and 36 mins
Categories: Literature & Fiction, Genre Fiction
4.6 out of 5 stars 4.6 (5 ratings)

By: Owen Jones
Narrated by: Hem Cleveland
Free with a 30-day trial

Lek was born the eldest child of four in a typical rice farming family. She did not expect to do anything any different from the other girls in her class in the northern rice belt of Thailand.

Typically that would be: work in the fields for a few years, have a few babies, give them to mum to take care of and get back to work until her kids had their own children and it would be her turn to stop working to take care of them.

One day a catastrophe occurred out of the blue - her father died young and with huge debts that the family knew nothing about. Lek was 20, and she was the only one who could prevent foreclosure.

However, the only way she knew was to go to work in her cousin's bar in Pattaya. She went as a waitress-cum-cashier, but when she realized that she was pregnant by her worthless, estranged husband, things had to change. She had the baby, gave it to her mother to look after and went back to work.

However, now she needed real money to provide a better life for her child and to make up for spending its whole youth 500 miles away. She drifted into the tourist sex industry. The audiobook relates some of her "adventures," her dreams and nightmares and her modus operandi.

It tries to show, from Lek's point of view, what it really is like to be a Thai bar girl - the hopes and frustrations, the hopes, the let-downs, and the lies and deceit that are part of her every day life.

One day she meets a man she likes, and he likes her too. Nothing new there, it had happened hundreds of times before, but she feels that it is different this time. They have a wonderful four weeks together and then he goes home - as they all had, leaving more promises and more hopes.

This one returns, but real life with a real boyfriend is not as easy as she had dreamed it would be. They go through good and bad times, but will they stay together and for how long? After all she has been through, can she be a normal girlfriend or wife again? Could she ever trust a man enough? Or would she be better off giving up her dreams and just working in the bar?

Lek begins to learn that getting what you want is not always all you hoped for.

What listeners say about Daddy's Hobby

I didn't really think I was gonna like this one. But it was excellent. I don't love the cover, which I guess is why you shouldn't judge a book by its cover. Its Just that if thats a Picture of Lek, she seems so young. She looks like a 10 year old, but the book is supposed to be about Lek when she was in her 30s? But other than that, and the abrupt ending I loved this! And the narrator (I listened to the audible version), did a FABULOUS job. Her voice fit Lek perfectly, and her accents seemed perfect. Overall, I highly recommend. And I would LOVE to listen/read the next book in the series. This book was given to me at my request. (Thanx Owen!) I am providing an honest and voluntary review.

To put it simply, if you read and understand this book, you will know more than 90% of the tourists who go to Thailand. Straight up!

All in all, an extremely engaging story and beautifully read. I thoroughly recommend It.

Great Audiobook ! I looked ofrward to listening everyday in the car. The story made me feel like i was back in Thailand. A great point of view around the Bar girls life and reasons why they need to work. Makes you understand more of why they do what they do. Highly recommended.