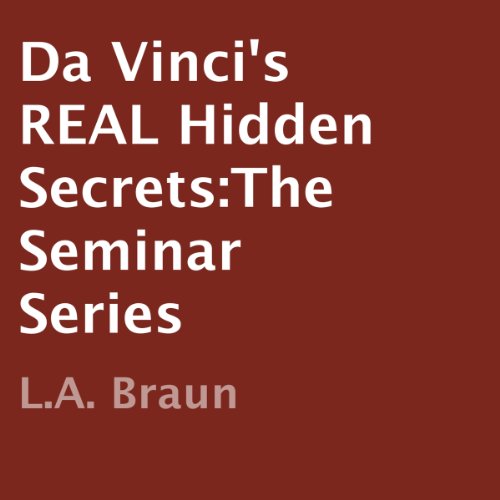 "DA VINCI'S REAL SECRETS! BUY IT NOW! The shocking revelations in this seminar audiobook about Da Vinci's secrets will astound you. There are REAL secrets of Da Vinci. This audiobook doesn't simply present hyperbole about 'theories' of Da Vinci's secrets, it actually illustrates his REAL secrets in three of his most famous paintings - the Mona Lisa, the Madonna of the Rocks, and the Last Supper! NOTE THAT ALL PICTURES AND CHARTS ARE UPDATED FREE ON THE AUTHOR'S FACEBOOK SITE. There actually are secret numbers in the Mona Lisa relating to the Fibonacci Sequence. There really is a secret hidden under a 'rose line' in the Madonna of the Rocks. There really are geometry secrets hidden in the Last Supper. This astounding audiobook not only illustrates those secrets but it then explores the message that Da Vinci might have been seeking to convey. It is a lighthearted take on what actually is an amazing and unprecedented revelation of REAL secrets that have been hidden in Da Vinci's artwork for hundreds of years. A must-buy for anyone who actually wants to know whether Da Vinci had a code and needs to know exactly what it was, buy it today and get a jump on everyone before these secrets go viral! THIS BOOK IS AVAILABLE IN DIGITAL AND PAPERBACK. Also see the original 'Da Vinci's REAL Hidden Secrets'and the indepth 'Da Vinci's REAL Hidden Secrets: The Theoretical Implications.'"