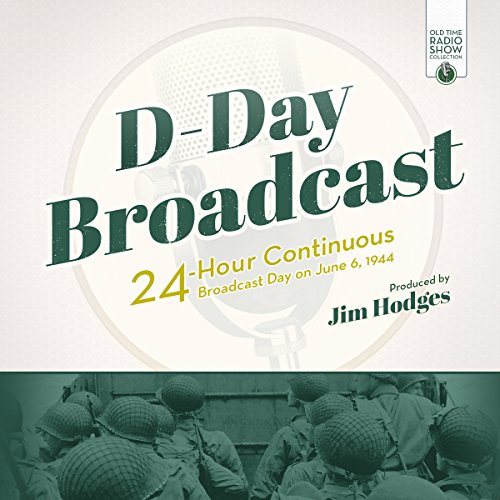 Relive D-day for the first time!

From the opening reports of paratroop landings by German broadcasters to the evening prayer of President Roosevelt, listen to each heart-stopping hour of live broadcasting from one of the most momentous days of the 20th century.

The Allies have landed at Normandy! A 4,000-ship armada! Heavy bombardments! Paratroopers! You will hear 24 full hours of crackling reports from London Radio; Eisenhower's Order of the Day and his personal message to the troops; the King of England; live recordings from troop boats, reconnaissance planes, paratroop transport planes, and the signal bridge of a naval vessel; live reports from the House of Representatives and the White House; and more! It's all here - the complete broadcast day of June 6, 1944.

Nothing wrong with compiling these recordings into one set

Thank you Jim Hodges for your efforts in putting this collection together. I love having these together rather than trying to download each one separately

Interesting Snap Shot of One Day in History

I read this book for two reasons. The first being that this was the day my father died, and too listen to what my mother listened to that day, to hear what she described to me, later in life. Hard to find fault as this is a 24 your collection of the actual news events that were reported on that day from all over the world. I find it interesting looking back after 74 years and comparing later events with the commentaries provided. The best part of the day was listening to all the people that kissed the ground Montgomery proved wrong by history, and to note that the two most proven Generals responsible for the defeat of the in the west ( Bradley and Patton) be ignored through out. You could tell the reports were for the most part being generated by the English and Montgomery's press agents. If you are a true history buff, I think you will enjoy this book.

Another broadcast taken from others

The title says it all... this is nothing but going online, finding this broadcast which is available all over the place, recording an awful 5 second intro using what sounds like a webcam, and then you sell it and make a profit.

If the guy can show me he actually bought and licensed this content then I'll change my score - but I can find this same exactly broadcast everywhere online and they're old audio. There was literally nothing done here except to put some awful out of place into and outro music on it.