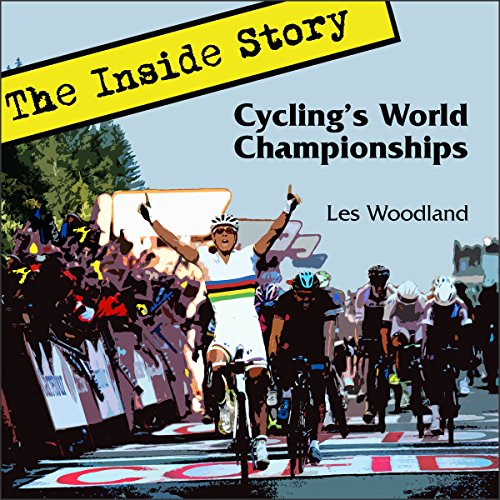 By: Les Woodland
Narrated by: David L. Stanley
Try for $0.00

Champion of the world! For a year the World Cycling Champion gets to wear a special white jersey with rainbow stripes. And then, for the rest of his career, he can wear a jersey with rainbow cuffs and collar. Unlike the Tour de France's Yellow Jersey, which can only be worn while leading the race, the rainbow is earned for life.

For more than a century, organized cycling has been conferring that extraordinary and wonderful title, starting with the first championships held in Chicago in 1893. But it wasn't until 1927 that there was a professional world road championship race, won on the famous Nürburgring car circuit in Germany by the great Alfredo Binda.

The story of the world championships is a fascinating one, and besides the well-known road and track competitions, there are many events that even the most dedicated racing fans might not know about, such as Cycle Speedway, Bicycle Polo, and of course the World Unicycle Championships.

Join Les Woodland as he tells the whole, fun, and engrossing story of the bravery as well as the treachery and trickery in the World Championships, and the athletes who have been able wear the coveted colors of the rainbow.

Author Les Woodland has been cycling for 50 years and has been writing about cycling since 1965, when he wrote his first reports for the British publication Cycling. Since then he has been a prolific contributor to newspapers, magazines and radio stations in the UK and Belgium. Mr. Woodland, who currently lives in France, speaks several of the languages of cycling: English, Dutch, and French.

Would you listen to Cycling's World Championships again? Why?

I would listen again, just to hear the anecdotes once more.

There were too many characters to choose from, but one stands out: Romāns Vainšteins, from Latvia, champion with no backing, and on his own overcame all obstacles. All of the cyclists who aimed at being world champions, have that drive that made them excel, and in Tom Simpson's case, die in the trying.

Eddy Mercx and his rival looking at eachother to see who would lead out first.

The champions riddled by alcoholism, drugs, who ended up dead too soon. And those that had to abandon

The stories are so varied. Some are sad, others make you laugh out loud, and others make you wonder about the ego of certain characters. There is a lot of information that I wasn't aware of, rivalry, behind-the-scenes events. The book is well written and the pace was excellent; David Stanley did a great job as the reader.