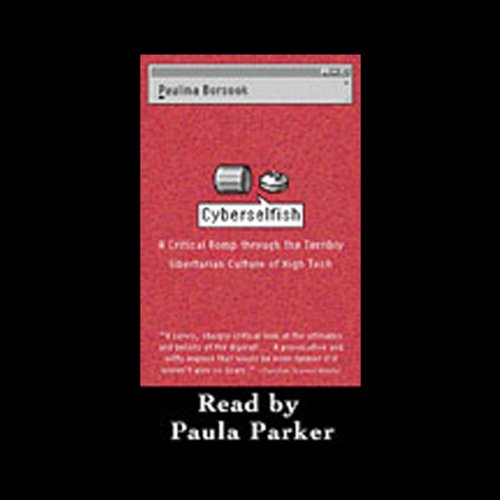 A Critical Romp Through the Terribly Libertarian Culture of High-Tech
By: Paulina Borsook
Narrated by: Paula Parker
Length: 10 hrs and 16 mins
Categories: Nonfiction, Social Sciences
3 out of 5 stars 3.0 (30 ratings)

In Cyberselfish Borsook journeys through and rants about high tech culture, profiling the worlds of ravers, gilders, cypherpunks, anarcho-capitalists, and other Silicon Valley life forms, and exploring the theory and practice of technolibertarianism in all its manifestations. She visits the Bionomics Institute, a libertarian thinktank, to explore how its para/pseudo/crypto "biological" thinking pervades high tech discourse on technology, economics, and life. She journeys to the front lines of the "crypto wars" to explain why cryptography has been such an important issue to both the U.S. government and the high tech community. She deconstructs Wired, the magazine that defined an era, and shows how many high tech thought leaders have at least one foot in the philosophies and misogyny of days long gone by. She also investigates the perplexing dilemma of philanthropy in high tech, exposing how little of the billions generated in the new economy filters into our culture at large, and defining what she calls the "cat-dead-rat" phenomenon, whereby high tech give unto the world the thing it loves, not necessarily what the world wants or needs. Finally, she examines the factors that have led to technolibertarianism, and wonders aloud about the extent to which high tech's creativity and energy and money and contributions to our general welfare are undermined by its self-centered politically myopic worldview.

Whether she is parsing Silicon Valley personal ads, hanging out with high tech gurus, attending conferences-cum-rallies or exposing the flaws in technolibertarian thinking, Borsook is full of original observations, mordant wit, and furious passion that readers wake up to the social and political consequences of having computer geeks run the world. Cyberselfish is sure to raise the hackles of high techies and to clarify what makes the rest of us so nervous about the brave new cyberworld.

If I Use Big Words, Does It Make Me Smart & Witty

As someone who usually enjoys reading about the culture of technology, I was looking forward to listening to this book. However, my expectations of the next Po Bronson or Sherry Turkle were sadly misplaced.

If there is a point to this book, I confess that I haven't a clue. I gave up on it after listening to nearly half of it. I was hoping for an alternative viewpoint to Rushkoff's 'Cyberia' or Levy's 'Hacker Crackdown', since she does touch a bit on both the Rave and Cypherpunk cultures. What I was not expecting was what appears to be a diatribe on the author's own hard feelings towards the industry. Everything she has to say is extremely negative, or tinged with so much sarcasm that it's impossible to judge what point she is trying to make. Well, except for the fact that she is very bitter about her experiences with 'Wired' magazine. That comes across loud and clear.

Although the book is read by someone other than the author, the reader accurately portrays the author's love of her own voice. She comes across as one of those people who take five minutes to say something that needs a sentence at most. Not only is she addicted to adjectives and labels, but she seems to be on a mission to see how many can fit in one run-on sentence. If you doubt this, just read the book's title and description. This makes it really hard to follow, or understand, what the author is trying express. So much so, that I had to concentrate more on focusing on listening to the book, rather than watching the road.

How unremarkable is this book? Consider the fact that not once, not twice, but three times my iPod reset to a previous chapter, and it was nearly 10 minutes before I realized that I had already listened to that chapter.

Sadly, it seems that the best books on cyber-culture remain solely in print, and not in Audible form. If you are looking for a 10 hour rant on the soul of the internet and technology, this is certainly one point of view. Just not the most accurate or well-

What did you love best about Cyberselfish?

This book so perfectly describes the cult of libertarianism, which I have only become fully aware of in the past five or 6 years. As a computer programmer I see her narrative playing-out before my very eyes on a daily basis, yet I had no idea that the tech industry was so utterly saturated with it. Over the past 15 years I've encountered libertarians in tech who wouldn't have to tell me they were libertarian, they'd just start popping-off with some anti-government conspiracy theory garbage and it would be obvious. In many cases it wasn't until years later that I started connecting the libertarian dots. This book tied everything up succinctly.

Also, Paula Parker did a fine job of narrating the book.

This book is a left-wing political screed by an obvious Maxist feminist, and should have been represented as such. The description of the story is very misleading.

If only one thing, Borsook does succeed in capturing the ambivalence and flat-out fear that many (at least from the media) have voiced about technologies such as the Internet. Her treatment of the subject, however, is fear-based, and as such is confused and hippocritical.

Her credentials for criticism seems to be attending several high-tech industry conventions and being a contributing writer for Wired Magazine (which by her own admittance is more about style than substance). In her defense she claims "but some of my best friends are geeks". As comforting (or as disturbing) as it is to imagine that a "friend of geeks" could write such a scathing indictment of their industry, Borsook's writing shows that she is far far from an Insider. From the very first go, she takes a narrow and short-sighted view of high tech by concentrating only on the manic dot-com boom of the Silicon Valley, as if the Net was not a global phenomenon. She confuses the business MBA's (the Steve Job's) that head the High-Tech companies, whom she slaps with the label "Technolibertarians", with the geeks (the Wozniak's) who actually create the technology, and indeed who are motivated by tinkerer's passion for playing with technology and not money. She make ad hominem attacks such as: all geeks/nerds/tech-works (apparently seeing no difference) suffer from lack of social skills, believe blindly in technology, are given to sexual perversity, and are either "raver" hippies or chauvinist "gilders". These are so off the mark as to not to even deserve further mention.

Another point of irritance is her self-contradiction. Her indictment of technolibertarians centers mainly around their focus on profit as an end. And yet, through other chapters, she measures the success of females and the capacity of charity given by that very standard! Also annoying, Borsook detours midway on a tangent, whining about how her former employer Wired is evil and chauvinist.

I enjoyed this book. It was a good portrayal of the Libertarian Cyberscene. It did get a bit tedious at the very end and I became a bit bored with it. I felt the author ran out of potent points and material and became a bit repetitive. I think Civil Libertarians would enjoy it.