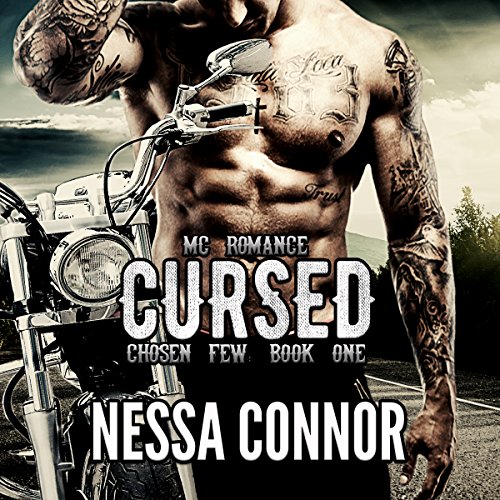 Falling in love is the most dangerous thing they could do.

Audra Montrose has a plan to escape her abusive, billionaire husband - and she'll need an outlaw biker club to make it happen. If the Chosen Few can get her across the border into British Columbia, she'll be safe.

But when she meets Dirk 'Cutter' Beaumont, the club's Enforcer and her escort for the trip north, Audra discovers a whole new kind of peril. After years of being closed off to everyone, she's stunned by the strength of her response to this dark, lethal giant of a man.

Dirk isn't happy about babysitting some rich guy's spoiled wife. Then he learns the truth about Audra and her husband, and the curvy little brunette goes from a nuisance to a temptation and someone he needs to protect.

It isn't long before the heat between them bursts into flame. But Audra's husband wants his property back - and he doesn't care who dies in the process. With a bullseye on their backs, can Audra and Dirk survive long enough to see if they have a future together?

What listeners say about Cursed

Who's Your Old Lady?

There's nothing more romantic than an a sexy, alpha biker asking you to be his Old Lady…..but then again, Old Lady in "biker language" means "One Hell of a Biker Bi***!" Lol, so it works.

Compared to other short stories in my library, this one is on the top end of my "like" list. Cursed had me hooked from the first chapter, and kept me engaged all the way to the end. Nessa did an outstanding job developing both the story, and characters, while weaving in enough suspenseful drama about Audra, and her attempt to run from her husband, there were times I felt little anxious, and a lot of dread. In addition, Nessa successfully balanced the suspense, with some steamy sex scenes, and Aurda's and Dirk's growing attraction to each other. All in all, a captivating story!

The narration was fantastic. Andy projected a masculine but slightly gravelly voice that was a perfect fit for the characters.

Audiobook was received at no charge by the author, publisher and/or narrator in exchange for an unbiased review via Audiobook Boom dot com.

For those who have a Kindle Unlimited membership, this story is currently being offered. Add the audiobook, and you got yourself a great story, at a great price. Also, this is perfect for a whispersync deal!

Narrater talks so slow 🐌 it made the book so hard to listen to. Worst

Could have been so Much Better..

Would you try another book from Nessa Connor and/or Andy E. Ross?

The story starts off with the female lead, Audra, who needs the Club's help escaping to Canada while running away from her billionaire husband.

Cutter, the club's enforcer, is chosen to get her there safely.

Audra sleeps with Cutter, but feels like he is acting like a jerk, so..
She gets the idea in her head to teach him a lesson and tries to
sleep with his brother, Greg.
At this point, I'm more than annoyed with Audra. She has enough going on in her life, so why add more drama to the situation??
Here is a thought Audra... leave the MC alone and get the heck out of Dodge...

Of course she has to mess with Cutter's brother, then there is some more drama that I feel could have been avoided.

Overall, it was an Interesting Read BUT.. it could have been so Much Better with a little "tweaking".

Note:
"This audiobook was provided by the author, narrator, or publisher at no cost in exchange for an unbiased review courtesy of Audiobook Blast."

The story came off boring. I attempted to listen multiple times but this story could not keep my attention. Unfortunately, the narrator's performance made the story worse.
This story was given free by the author in exchange for an honest review.

I believe this is my first book by Nessa Connor. I don't read many suspenseful romances and the story was quite different than most books I read.

The author does not go into much detail or depth about the characters. The story is told in multiple points of view. It's a full story with no cliffhangers.

The narrator did ok. The voice was good for portraying the male characters although it was a bit hard at times to understand what he was saying. Not an ideal voice for the female voices.

The story was interesting but I found it a bit too shallow. I like more details and information about what is going on with the main characters.

Dirk (aka Cutter) is one hot biker! I really liked Audra's character too. Her story line was intense and you definitely wanted to root for her character. The story and suspense that it brought were really exciting and held my interest from start to finish. I thought it was very well written.
The audio production was the only downside to this book. The narrator was very hard to hear during particular parts unless you turned up the volume to uncomfortable levels. I liked the narrator's voice though and felt connected to the story. He did a nice job and loved him as Dirk in particular.
I'm looking forward to possible more stories of the secondary characters that we met in this story especially sweet biker Wrench.

This is my first Nessa Connor book, and it was amazing! What a great start to a series. Audra is running away from her abusive husband and goes to the Chosen Few Motorcycle Club for help. Cutter(Dirk) is the member who is going to take her to Canada so she can start her new life. With a few ups and downs and capture by her husband, we get to see Dirk evolve and Audra come back to her true self. This is completely enjoyable, has me hooked and I look forward to the next in the series.

Andy E Ross has a sexy voiced, perfect for this book. I do wish he his voice did not fall at the end of sentences, made it slightly difficult to hear him at times, and his voice is so good, you don't want to miss anything!

--I received a copy of this audiobook in exchange for an honest review.

This is a fast listen but in it you will have steamy hot sex, alpha bikers, a young woman on the run, a crazy Husband and some drama and suspense. I do wish it was longer, it was a good book but it did skim over parts that could have turned this into a 5 star.

Andy did a good job narrating but the volume keep going up and down for me, maybe audible can fix this?

Starting out Audra needs to get away from her abusive and sadistic husband, she enlists the help of MC club called the Chosen Few.

Cutter and his "brother's" were great character's. Audra not so much.
Audra's character is likable in the beginning of the story then becomes unlikable and dumber as the story goes on. She's upset with Cutter so decides to jump into bed with his "brother" to teach him a lesson. Just…..No. Just because it didn’t happen doesn’t matter. The intention was there. A little more time developing the relationship between Cutter and Audra would have gone a long way.

Andy E. Ross did a pretty good job with the narration. His male voices are of coarse fantastic. He has a nice deep voice that you expect your bad*** bikers to have. His female voices could use a little work, but with a voice that deep it's probably pretty hard to convey a soft female voice.

This audiobook was provided by the author, narrator or publisher at no cost in exchange for an unbiased review courtesy of Audiobook Boom

This was my 1st Nessa Connor book. And I am just getting in to MC books, but it seemed like the heroine dumbed herself down during the course of the book. Thats my only real complaint.
This audiobook was given by the author, narrator, or publisher at no cost in exchange for an unbiased review via Audiobook Boom.

Audiobook was received at no charge by the author, publisher and/or narrator in exchange for an unbiased review via Audiobook Boom dot com.

This is my first book from Nessa Connor and it won't be the last it was a gritty storyline that I enjoyed she weaved the suspense danger in it very well also the development of the characters was well played out , I personally could have easily listened to more content ,

The narration let it down slightly whilst he has a incredible sexy voice he does trail off on sentences and i had to rewind on more than one occasion .Will look out for forthcoming listens