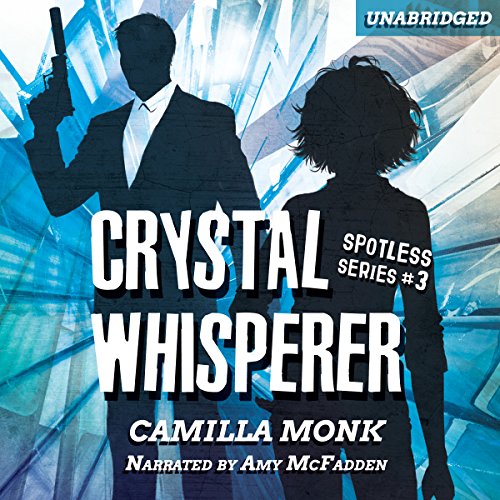 By: Camilla Monk
Narrated by: Amy McFadden
Try for $0.00

Perpetually foiled romance heroine Island Chaptal and reformed cleaning expert March - or is it Mr. November? - are enjoying a pleasant break in South Africa, after brushing with death in the inhospitable and platypus-infested mountains of Liechtenstein.

That is, until a commercial flight disintegrates over the Atlantic, killing hundreds, and Island's supervillain dad makes the news as the mastermind behind the attack. Old Lion Dries is now on the run, and he calls upon his last ally - and favorite disciple - March.

From the streets of Venice to the turquoise waters of French Polynesia, March and Island embark on a deadly race against the clock to find out what secrets lie behind Dries's downfall, and stop the mysterious Crystal Whisperer before it's too late. This time, though, there might just be no winning against futuristic weapons, CIA agents, Roomba cats, (reluctantly) evil henchmen, and dads who won't let you get your groove on, dammit!

What listeners say about Crystal Whisperer

Can you tell I am really upset, my advice wait to start the series. It is so good! It is a crime to leave us hanging!!

Amy McFadden is wonderful!!! I love the main characters Island and March!!! Camilla begins each chapter in a unique way. It seems like forever since book 2 but, Camilla did a great job of recapping in book 3 without repeating.

I highly recommend this series but only if you don't mind waiting!

A man is supposed to keep his woman, well feed, well dressed and well fucked. That is the best line in the book. My first tears came after Joy, Island's roommate finds her bound in her bed with a man in the room. She sings, Oh my God finally with the religious fervor of seeing Christ raise from the dead. I am listening to it for the fourth time, that part, not the book. Joy is so funny. Her BFF is trussed up looking ready for a BDSM session is about to happen. Before leaving the room, she asks, can I get you guys anything, booze, toys, protection? I don’t want to say anything about the book except is damn funny. Oh yea, I am a taking one star because the author plays that same old played plot line of… I hate him, I hate him, but his ass really looks good. I want to jump his bones. Hum, I must give that star back. read it and you will know why.

Where does Crystal Whisperer rank among all the audiobooks you’ve listened to so far?

It is one of the best narrated books I own.

The plot was keeping me on the edge of my seat the whole time!

Amy McFadden has a way of making you truly experience the characters, both male and female. I feel like they are people I really know.

Killing has never been so clean....

I'm aksing March to take a hit on Camilla Monk

I love March. He is just wounded enough to forgive him for his past.

The French,South Afrikaans and Italian followed by the translation was wonderful. It added the "special sauce" for the listener.

He's waiting for you.

The story, same as the first two books, is great, but leaving us with an antagonizing cliff hanger like she did!!!!!! The next book better be coming soon.

I care about these people. The pre-chapter quotes are a highlight of the book. I actually sat up in bed and startled my husband I was laughing so hard when she mentioned Chuck Tingle.

This book definitely moved forward the plot, and the ending...Phew. Despite the usual light humor scattered throughout, this book felt heavier than the last two. I won't spoil anything, you just have to listen/read for yourself. I am, however, going to breathlessly awaiting the next book in the series!

Story is a bit more tired than the earlier ones

Slightly less engaging than the first and second books but, otherwise, still pretty decent. The angst is a bit well-worn by now, and it might be time for the characters to shake it up a bit since they are just moving in the same old patterns over and over.

The tension between the characters feels strained. The use of the character from her past as the "bad guy" in this story was quite a stretch. Seems like Monk was trying to make the story more mystery-suspense driven than character relationship driven... she almost succeeded.

I will still read the next in the series. The narration is good. There is nothing graphic.

An awesome series to hear!

I absolutely love this series. Spotless is such a fun read and it was a joy hearing it. Worth the $$S

perhaps should be YA?

while I have (generally) enjoyed the series, I just can't get over the incessant stupidity of the lead female character. there's something extremely annoying about a character that is supposedly intelligent, continuously making stupid decisions, using the kind of logic that a 3 year old could poke giant holes through. I mean, who continuously fights to go on missions even though she can't fight, can't shoot and has an aversion to people being killed?!?!? I may or may not finish the series, but I certainly don't think I'll be tempted to buy any more series from the author........theres only so much Malibu barbie behavior one can tolerate in a lead female character!

You cannot go wrong with this author. Great story but you need to buy the previous books first.

I love these books and cannot wait for the next one. Brilliantly read by Amy McFaden. Please Camilla more!!!

What the ever-loving FireCracker!

A total 5 star read but the story lost 1 star from me because I absolutely, completely, totally HATE cliffhangers and this ends on the mother of all cliffhangers. Now I have to wait how long before the next one comes out? Aarrrrrrrgh!