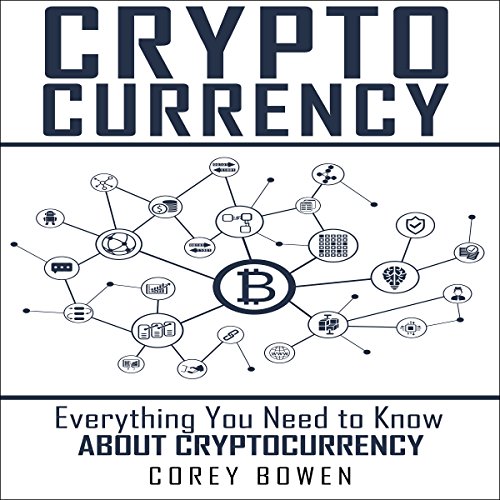 By: Corey Bowen
Narrated by: Andy Dickson
Free with a 30-day trial

It all began with Bitcoin. The revolution is now unstoppable. Which cryptocurrency will become the new dollar?

The market of cryptocurrencies has now reached over 350 billion dollars in valuation. It is a remarkable achievement, since now this industry is bigger than McDonald's and Pepsi. If this phenomenon could be left outside the media a few years ago, now it is impossible to deny that there is a true revolution in act.

If you have never heard about the term "cryptocurrency", you might be wondering what it is. A popular definition states that a cryptocurrency is a currency that operates trough a decentralized system (the blockchain), is anonymous for the most part, and is not backed up by physical coins.

It is easy to understand why so much attention is going into this space, especially since Bitcoin crossed $10,000 in November. The general public, however, often is not aware of the fact that there are more than 1,300 cryptocurrencies in circulation and that most of them are going to disappear in the next few months. There is this aura around cryptos that either showcase the next "big thing" or the quintessence of evil.

In reality, as it happens most of the time, the truth stands in the middle.

It is true that there are projects based on the blockchain that are scams, but this does not mean to underestimate the value of cryptos like Bitcoin, Ethereum, Litecoin and Neo, just to name a few of the meaningful applications that have seen the light in the past two years.

With his flawless style and his profound knowledge, Corey managed to put together a simple yet efficient approach to introduce people to the world of blockchain and cryptos.

This manual goes into well-researched and newbie-friendly reflections about the most important aspects of cryptocurrencies, such as:

By listening to this audiobook, you not only get a better understanding of the cryptocurrency world in general, but you get access to powerful information that provides a 360° education.

Disclaimer: This audiobook is not for you if your goal is to get a quick and superficial grasp of cryptos.

Corey fully believes in this new financial system and wanted to offer a complete education trough this manual, while still letting the average Joe to understand it easily.

Do you want to understand the world of cryptos and join the financial revolution?

This book is very well written and to the point. In future, cryptographic forms of money or digital currencies will be a noteworthy trading tool. It's a bit long-winded in places, and somewhat rambling, jumping around to different points in time, but on the whole it's well worth the read. I am enjoying it immensely. This is something everyone needs to know about.

This is a great trading book that I love to read.
All of the information, tips and guides that I need to know about Cryptocurrency, Bitcoin, Blockchain, Ethereum are already included and well written inside. Corey Bowen has done an incredible awesome job in compiling and creating this book.

This book is a result of well researched on cryptocurrency.
The author has huge knowledge about it and he explained all the questions what i had to know about it. This book is beginner friendly and all discussions are in easy manner.