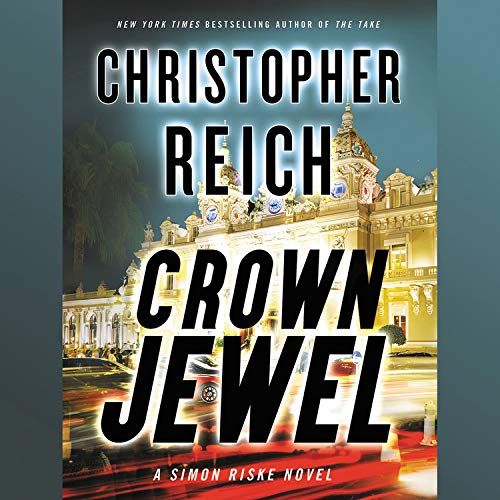 By: Christopher Reich
Narrated by: Paul Michael
Try for $0.00

Stolen sports cars, brilliant casino heists, and the brazen kidnapping of a prince: only the shadowy spy-for-hire Simon Riske can stop the mastermind behind it all.

Monte Carlo's lavish casinos have become the target of a sophisticated and brutal team of professional gamblers; a casino dealer has been beaten to death; a German heiress' son has been kidnapped. Who better to connect the crimes and foil a daringly brilliant plot than Simon Riske, freelance industrial spy?

Riske - part Bond, part Reacher - knows Monte Carlo well: It's where he was once a thrill-seeking thief himself, robbing armored trucks and leading police on dangerous car chases across the Côte d'Azur, until he was double-crossed, served his time, and graduated as an investment genius from the Sorbonne.

Now, Riske is a man who solves problems, the bigger and "riskier" the better. From the baccarat tables of Europe's finest casinos to the superyachts moored in Monaco's Port Hercule to a secluded chalet deep in the Swiss Alps, Riske will do what he does best: get in over his head, throw himself into danger, and find a way to outthink and outmaneuver villains of every stripe.

In one of the most clever, enjoyable, and entertaining new series to come along in years, this sequel to The Take gives listeners what they want most: a hero we can root for, locales we wish we were in, and a plot that never lets up.

"A stylish international thriller.... Reich's solid tradecraft and nonstop action are humanized by the hint of a relationship of the heart." (Booklist)

"[An] entertaining sequel.... Reich infuses his narrative with numerous plot threads that seem separate but end up satisfyingly intersecting for a suspenseful ending. Readers will want to see a lot more of Riske." (Publishers Weekly)

What listeners say about Crown Jewel

I listen to 100+ Audible titles/year... mostly fiction "thrillers". Crown Jewel moves into my Top Ten of the past year or so. Seems like an excellent movie possibility with the right actor for Simon Riske.

I read The Take first and it was good enough to lure me to Crown Jewel which I enjoyed much more. Not sure the title is appropriate but the high adventure of Monte Carlo and European wealthy plus Riske's character combined for a fine dozen hours of listening. Lots of plot twists and turns !!!

Not the author’s best.

I have listened to many of the authors’s books, this is not one of his best. Too much cheesy sex and cheesy action. Would prefer more character development and plot development, and less hand to hand combat and unreal smack downs. I think this happens when an author has to crank out a book under a definite deadline. The author’s other books have much more engaging plots and much more engaging in character development, I hope he gets back to that.

The story had great potential. Then the author just went way too far in the realm of unbelievable happenings. I am all for a little realism in the way the protagonist isn’t the biggest baddest guy in the world, but Riske gets repeatedly physically beaten to the point that he would be in a hospital bed for weeks. Add to that his refusal to remove a threat when he has the opportunity and the story just got ridiculous.

I enjoyed this one even more the first. Fun romp through the south of France. If you liked the 1st Simon Riske novel you will like this one.

Very good story but too much foul language and the explicit sex was not necessary.

I enjoyed the first installment so I had high hopes for this book. While I thought the first book a bit more to my liking, I enjoyed this story too. Characters are interesting, the story moves along at a good pace and narration is first rate. I think if you give it a try you will like it.

man that was good!

I can't wait for the next one in the series. the narrator another fantastic job. Thank you for the author for keeping me on the edge of my seat.

Excellent story and plot, wonderful performance, great character development. The ending was a bit short on detail and I hope this is not the end of the Simon Riske story.

If murder and mayhem can be fun... this is it.

This one is an easy review. It was just plain good. You wouldn't read it for the depth of the plot or the accuracy of the history (although both are very well done). This is a book for the beach or the pool. One to get lost in. Fast cars, European globe trotting, Bad bad guys and Good good guys (and boy and women). No crazy twists and turns created to get the author out of a corner he painted himself in to. Good guy is hired to find out who is ripping off a casino and in the process meets a real life princess who has a 12-year-old son in a Swiss boarding school. Good guy gets side tracked from his primary purpose for being in Monte Carlo to quite literally rescue the princess who isn't even aware at that point that she needs rescuing. The narration is brilliant and makes a great adventure story (no real deep mystery here) even better with good voices, mild acting, and good quality reading. All around it is just fun. I actually hope there are more.