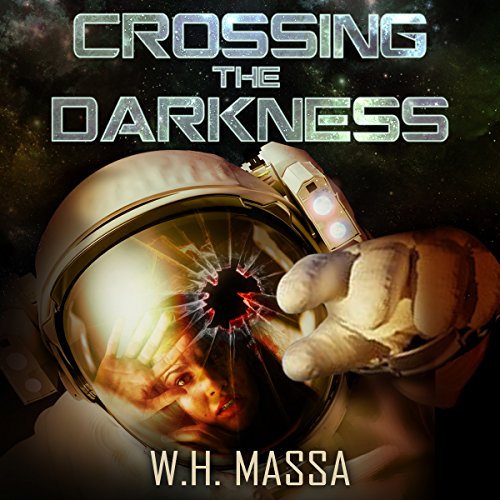 By: W.H. Massa
Narrated by: Joe Hempel
Free with a 30-day trial

A ship of horrors. A journey into darkness. An ex-con and an ex-cop must join forces against the next step in human evolution.

Faith Cadena hopes to make a new life for herself on a new world far from Earth. After doing hard time for a crime committed in her youth, all she wants now is a chance at a fresh start. Booking passage on an interstellar colony barge, Faith expects an uneventful three-year voyage spent in cryogenic stasis. But her dream of a better life becomes a nightmare when she is prematurely awakened halfway through her journey and finds herself trapped aboard a ship of horrors: the vessel is adrift in the far reaches of space, its crew brutally murdered, and a ruthless killer in command. With the nearest outpost millions of miles away, it's up to Faith to face an inhuman adversary with terrifying plans for the ship's 4000 sleeping passengers.

What listeners say about Crossing the Darkness

This sci-fi thriller is a quick but intense story that will keep you on the edge of your seat and has hints of “2001: A Space Odyssey” in it. Ex-con, Faith Cadena, boarded the Orion hoping to escape her past and start a new life on a plant far from earth. Awakened early from cryogenic sleep, Faith’s hopes are dashed as she finds herself in a desperate fight for her life. This is a well written, exciting, action packed thriller set in deep space. Faith is a great protagonist and you soon become invested in her survival. Joe Hempel did a great job of the narration of the audiobook, bringing the characters to life and making you feel the tension and fear in the story. I loved how the author managed to create depth and complexity in the characters and cover themes of man vs technology, prejudice, corporate corruption and consequences to actions, in this short piece of work. This is a suspenseful, thrilling story that definitely has some horror elements to it.

Crossing the Darkness by W.H. Massa was a really entertaining sci-fi horror listen. It was a mix of Passengers with Jennifer Lawrence and the SyFy series Dark Matter. Faith wakes up out of the deep sleep on the ship that she is on, taking her and her fellow passengers to a new planet for work. Only problem is...she isn't supposed to wake up yet, since they are nowhere near their destination. What Faith learns next is terrifying. There is something on the ship that is waking passengers up and doing terrible things to them...that's all that I want to say, since I don't want to give away any spoilers! Considering that the length of the novel isn't that long, the author did an excellent job of creating a solid backstory, along with a believable (as far as sci-fi stories go) and entertaining, fast-paced story. I'd recommend this book if you're looking for a shorter, fast-paced sci-fi listen. Joe Hempel was an excellent choice to narrate this book. He has such a wide range of unique voices for the various characters and he gives life to each one. It's so easy to fall into a good story that he narrates. I continue to be a huge fan of his. I was voluntarily provided this free review copy audiobook by the author, narrator, or publisher for an honest review. Did you find this review helpful? If so, would you please take a moment and select the 'helpful' button below? Thanks so much!

I received this book for free for a honest review. This book was amazing and very well written. The storyline held my interest. as did the heroine. The narrator was good and brought the characters to life. Could be considered a cliff hanger. Reccomend.

A mix of horror and sci-fi

Crossing the Darkness was a very creative book filled with action, suspense and horror. The narrator Joe Hempel did a phenomenal job. I was hooked on this book from the first page til the end. I received this audio book at my request and I am voluntarily leaving my honest review