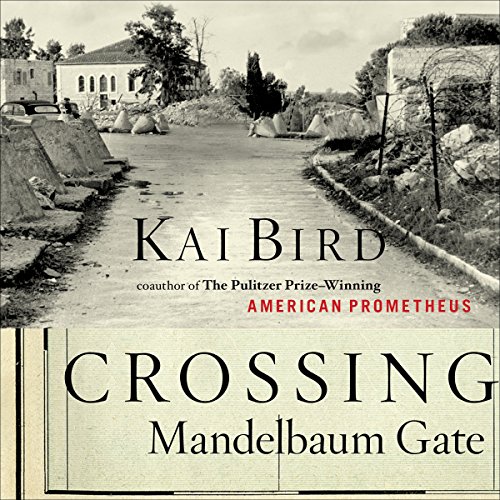 Through a blend of memoir and history, Pulitzer Prize-winning writer Kai Bird recounts the Western experience in the Middle East and just why it has been so turbulent. Through Bird ’s Zelig-like presence, the reader experiences the Suez War of 1956, the June 1967 War, and the Black September hijackings of 1970 that led to the Jordanian Civil War. Bird's memoir also shows how all of these momentous events led to the rise and tragic downfall of a secular Arab nationalist ethos—only to be replaced by the rise of a fundamentalist, politically reactionary Islamist movement.

In narrative history, Bird tells the stories of such illuminating figures as life-long Jerusalem resident George Antonius, author of The Arab Awakening, and his charismatic wife; Jordan’s King Hussein and his CIA connections; the businessman Salem bin Laden, Osama’s older brother and a family friend; Saudi kings Faisal and Khalid; President Nasser of Egypt; and Leila Khaled, the striking young Palestinian radical who hijacked one of the Black September planes.

Bird’s personal insights and unique connections create a portal into the sensibilities and psyche of these lands that is sure to fascinate both those fluent in the history of the Middle East and the many who simply want to understand this region that the West seems to be both fighting for and against.

“Engaging miniature portraits of overlooked characters and events....Succeed[s] in explaining the perspectives of two peoples who view the Middle East conflict through different lenses.“ ( The New York Times)
"Bird's brushes with history—his first girlfriend was held hostage on an airplane hijacked to win Khaled's release, for instance—brings home the deeply messy humanity of the stories he binds together in this kaleidoscopic and captivating book." ( Publishers Weekly)
"Although broadly sympathetic to Palestinian aspirations and suffering, Bird, whose wife is the child of Holocaust survivors, is also acutely sensitive to the fears and dilemmas faced by Israelis. This is a deeply felt and moving chronicle of one person’s up-close view of the human cost of this seemingly endless struggle." ( Booklist)

The reading is atrocious

I thoroughly enjoyed the book and recommend it, however I cannot recommend the audio book. The person who read this book managed to mispronounce almost every proper noun in the book. The names of Israeli and Egyptian cities, Israeli prime ministers, authors, terrorists, etc., etc. I have listened to many many audio books, and I've never heard one read more poorly. I had a very hard time following the book in part just because the pronunciation was so bad I had to stop and think "what on earth did he just say?"

Other than Nakba and Naksa (Arabic), he mispronounced almost every non-English word and name, including well-known names such as Kurt Weill. Very annoying.

Do you think Crossing Mandelbaum Gate needs a follow-up book? Why or why not?

Narrators should research the pronunciation of non-English terms and names before embarking on narration.

I'm enjoying the story, which is a view on the Arab-Israeli conflict from a unique and interesting perspective. The history and personal experiences are woven comfortably and I find unfortunate behaviour from any side is presented factually and unemotionally. I know little about the correct pronunciations, but even I know that "Haganah" must have only one pronunciation, not change in the subsequent sentences and that must also be true for Moishe Dayan's last name. I am also old enough to remember that there wasn't a UN Secretary-General called "Dag Hammer-hold" in the 1950's. Despite this distraction, it's a great book.

Crossing Mandelbaum Gate impressed me as an especially illuminating and exciting piece of memoir and history. From Nasser to Hillel Kook, from accounts of American diplomats during unfolding crisis, to tales of escape and resistance in Nazi occupied Europe, diverse strands of history are brought together in a coherent and flowing narrative.

The reading was strong and very fluid, and helped my attention remain riveted. Given the variety of foreign language references (Arabic, Hebrew, German, Croatian, Italian), it is no surprise that there were errors of pronunciation, however the pace of and clarity of the reading more than compensated.
.
It would be a mistake to underrate this book.

The writer spends far more time on his own family history than on what was actually going on in the world and seems much more interested in what his mother thought of current events than even his diplomat father. The reader's pronunciation of hebrew and arabic words can be really off putting and further detracts from the experience.All in all a frustrating experience.