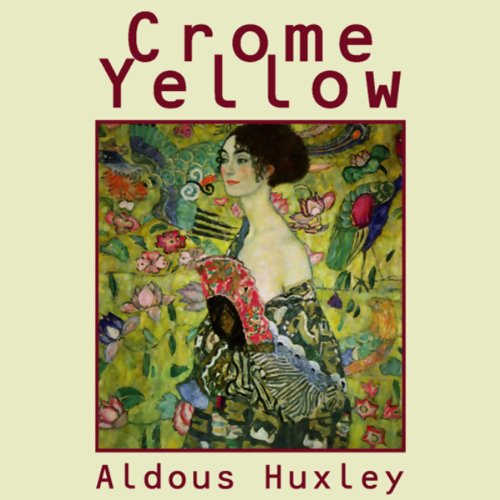 By: Aldous Huxley
Narrated by: Robert Whitfield
Try for $0.00

One of the greatest prose writers and social commentators of the 20th century, Aldous Huxley here introduces us to a delightfully cynical, comic, and severe group of artists and intellectuals engaged in the most free-thinking and modern kind of talk imaginable. Poetry, occultism, ancestral history, and Italian primitive painting are just a few of the subjects competing for discussion among the amiable cast of eccentrics drawn together at Crome, an intensely English country manor.
(P)1998 Blackstone Audio Inc.
Classics
Show more Show less

"Crome Yellow, Huxley's first novel, is famous for its technique, ideas, and acute psychological descriptions." (The Times, London)
"Robert Whitfield's unabridged reading of Huxley's first novel is a triumph of one man's vocal capacities....Whitfield's vocal acrobatics in portraying the cast of characters assembled at an English country estate for a summer vacation in the 1920's makes for dazzling aural entertainment. Otherwise fatuous goings-on become intriguing shenanigans, and the characters' psychological portraits are rendered accurately through the unique voices Whitfield assigns them." (AudioFile)
"Robert Whitfield does it full justice and proves that he is now one of the best narrators in the business." (Library Journal)

What listeners say about Crome Yellow

This is Huxley's satire of the personalities of the Bloomsbury Group plus a few others. If you don't get satire or like dry British humor, you're really, really going to hate this book.

That said, it is a brilliant old-school satire, and very much of its time. That is to say, by way of fair warning, the detraction of racial epithets does appear from time to time.

Denis, a 23 year-old writer who's just published the requisite "slim volume of verse" and is hard at work on his first hackneyed novel has come to the Wimbush family's seat of Crome.

When he arrives, Mrs. Wimbush flatters her guest by exclaiming she'd forgotten he was coming. She hardly listens to him because she's busy making astrological calculations. Once a degenerate gambler who lost vast sums, these days Mrs. Wimbush keeps the sweet cash rolling in by consulting the stars.

Denis is helplessly in love with Anne, the daughter of the house, but she is preoccupied with another guest, the lascivious painter Gombaud. Another girl, Mary, is all too interested in Denis and chatters at him at the most inopportune times. The vicar is laboring under the misapprehension that the Counter-Reformation may still be going on, what with his fear of Italian poisoners and Jesuitical conspiracies. (Nonetheless, "There were times when he would like to beat and kill his whole congregation.") And then there's a strange journalist, Mr. Barbecue-Smith, who gives Denis some advice: he must try automatic writing, so that he may decant inspirations from the unseen world in "aphoristic drops." After all, that's what's behind his own impressive daily word count!

It is a house party from hell, complete with a village fete. The mad personalities fling witticisms and epigrams, holding forth upon philosophy, chattering constantly, even unto breakfast.

For me, Mr. Wimbush was the star-turn. He's the only one who really talks sense. This observation is priceless: "As reading becomes more and more habitual and widespread, an ever increasing number of people will discover that books will give them all the pleasures of social life and none of its intolerable tedium. At present people in search of pleasure naturally congregate in large herds and make a noise; in future the naturally tendency will be to seek solitude and quiet. The proper study of mankind is books."

He also believes in the "perfectibility of machines," hoping one day his ideal may be realized and he will "live in dignified seclusion surrounded by the delicate attentions of silent and graceful machines and entirely secure from any human intrusion." (Alexa, bring Mr. Wimbush a gin and tonic).

I loved it. I listened to it while I restrung a harp and several other stringed instruments. All the while I kept imagining the book fully illustrated by the late Edward Gorey. It would have been divine.

Excellent Reading of an intellectual book

Would you listen to Crome Yellow again? Why?

I certainly would. Aldous Huxley's manifold characters are vividly portrayed. The philosophical musings are interesting and situations are humorously described. Even the names Huxley gave to his protagonist are already signifying their characters, It was an edifying and entertaining read (or more correctly "listen").

the chapters need to be fixed. the book has 8nterest8ng characters. i liked the story about the little people having a normal sized son... it was entertaining.

The narrator did a good job, giving the reading of this book an interesting feel of the time and country.

This is the CODA of Huxley's canon

What disappointed you about Crome Yellow?

Here's an obscure quote that sums up how I feel "I mean Led Zeppelin didn't write tunes everybody liked. They left that to the Bee Gees." - Wayne Campbell, Wayne's World

The thing that I loved about Brave New World is that Huxley was able to insert his philosophy and ideas into an overall narrative, which made it easier for the reader (or listener) to absorb. For me, this didn't happen in Crome Yellow. I'm not sure if this was a common practice in the 1920's, but the premise is that of bright young minds gathering in an old English estate and discussing various subjects in an intellectual manner. Like a social think tank. Giving the book almost a vignette style. Some of the subjects were interesting, but they were very few, far an in between. It was difficult to stay engaged.

What was most disappointing about Aldous Huxley’s story?

I would not say disappointed. I appreciate that this was Huxley's first novel and I'm glad I listened to it for that fact alone. However, the "story" was simply not my cup of tea. I would like to attempt it again, but I would have to be in the right mind-set for it. There are some good nuggets to think on.

Robert Whitfield does the best of what he has to work with. He makes the voices distinguishable, is able to color the dialogue and any lack of attention that the listener may experience because of the "story" is not his fault. A less talented narrator would make Crome Yellow a much more tedious listen. I would give serious consideration to another book if we were narrating it.

If you could play editor, what scene or scenes would you have cut from Crome Yellow?

That's the problem. I found myself tuning out a lot of it, so I can't remember the parts that would need cutting out.

Despite my criticisms, I like Crome Yellow in terms of following the trajectory of the author. From what Aldous Huxley did here and how he refined it in Brave New World. I'm looking forward to reading more of the author's works.

This "English country house" novel has many trappings that are standard: a main character (one of them) who is a self-conscious, artistic type incapable of action, early 20th century class pretensions, and the idle country house setting.

However, Huxley skewers many stereotypes, and that is what makes it fun.

The reader is very good, doesn't get in the way at all.

Perhaps it is because I never found British literature profound or intriguing that I also did not like Chrome Yellow. Perhaps is that I do not understand British humor, but the book was not comical, nor it did portray a psychological picture of the characters. It was on the other hand, a good snapshot of the social dynamics of the era, but the characters lacked emotional depth and the situations were shallow and disconnected. The narrator did an excellent job, however. If you like Dickens and other British authors, then this book might be ok. If you enjoy the depth of Ayn Rand, Dostoevsky, Faulkner's characters, then do not read/listen to this book.

I laughed out loud several times. Excellent narration and story, a lot sillier than the other Huxley books I've read (Eyeless in Gaza and Brave New World) but still profound. You could even say it was "carminative"! That's an inside joke for thsoe who've listened to this gem. Also, Mr Barbecue-Smith is a very good name for a character. This audiobook really has cheered me up. I'm going to read The Island on my Kindle immediately or quite soon.

Witty, humerous and sharp edged. The kind of thing that benefits from being read aloud particularly by a fast reader like me, as it made pay proper attention to all the lovely lines

Thoroughly enjoyable! The characters, the mark of the time on thought and life, depicted, now playful, now melancholic? but always with full colour, honesty and depth? and with such delightfully vivacious narration, it was a joy.

Nothing astonishing about it but a pleasant read none the less. also most will have read brave new world which part of is hinted at.

He do the intellectuals in different voices

This is Huxley’s first novel. Set in a country house party after the Great War and read here expressively by Robert Whitfield. The plot is episodic and comic, satirical and sometimes touching. Denis is a would be writer in love with Anne who becomes involved with an artist Gombauld. Denis himself ignores the attentions of Mary, who is seduced by Ivor Lombard, who abandons her. In truth the plot is not much. This is a comedy of manners, which depicts the artists and intellectuals who stayed at Garsington. The craze for the occult, and the sardonic views of Scogan a satire of Bertrand Russell are depicted. Jenny who is deaf is revealed to be writing a satire on the house party. She plays the drums at the village carnival. An earlier owner of the house turns the place into a haven for dwarves, before his world is destroyed by his normal sized son. This is described in heroic couplets. I found the novel diverting, perhaps because I was a specialist in the art and literature of Modernism.