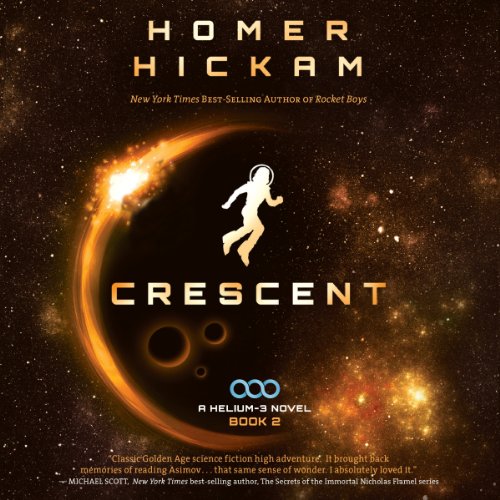 She was born to kill, born to die. Crescent is a crowhopper - a genetically modified mercenary programmed for ruthless warfare. When she’s taken prisoner by Crater Trueblood instead of being killed in battle, she thinks it’s a disaster. Crater is weary of war. He’s a miner, not a soldier. He’d rather be mining Helium-3 than battling the infernal crowhoppers. But after he captures Crescent and brings her to Moontown, he’s surprised how much he enjoys her company.

When she’s falsely accused of murder, he becomes an outlaw to help her escape. The unlikely pair escape into the "big suck" and wind up trekking with a caravan of mining pioneers toward a lunar ghost town called Endless Dust. To survive, they must do more than navigate the beautiful, desolate moonscape and battle a persistent band of crowhoppers sent to capture or kill them. They must decide what - and who - is truly worth fighting for.

What did you love best about Crescent?

It's not high brow, fancy, super deep and it's fun, easy and perfect for a great drive on a long trip.

Excellent middle book in the trilogy

Excellent character development, some really original ideas. Since Mr. Hickam actually is a rocket scientist as well as a fine writer, the science it the book is very realistic without being overbearing.

Often the middle book ends up being the weakest in a trilogy, but I suspect this will not be the case in this ongoing series.

This is a "different" type of coming-of-age story, it's accessible to younger readers, and while there's a lot of fun in the books, parents don't have to worry about their children reading a book that glorifies questionable ethical values.

This is a war story, of a sort... but it's also a story of growth of understanding between totally different (and sometimes alien) beings...

If you liked the first book, Crater, you will definitely like this book. If you didn't read Crater, I would buy that book and read it then follow up with this one.

Homer Hickam is a good storyteller, most famous for his Coalwood series, who's volume Rocket Boys was the basis for the movie October Sky. He's written several genres, including non-fiction (the EXCELLENT must-read Torpedo Junction for WWII history buffs), WWII fiction (the Josh Thurlow series), plus other fiction ranging from SF to coal-mining fiction to murder-mystery archeology in the Dinosaur Hunter. as well as his memoirs in the Coalwood series (Rocket Boys, Sky Of Stone, The Coalwood Way, We Are Not Afraid).

I've read everything he's ever published because he's one of those authors you don't need to worry about. If he publishes it, then It will be good.

Try this out, if you haven't read Crater, then get that one as well and read them in order.