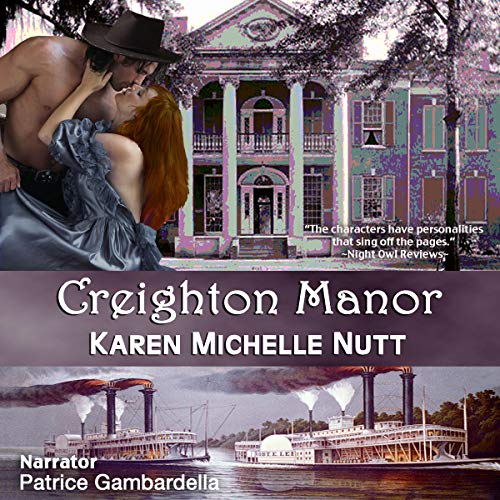 By: Karen Michelle Nutt
Narrated by: Patrice Gambardella
Try for $0.00

The last thing Gillian Metcalf remembers before she passes out is being aboard the Queen Mary in Long Beach, California, where she witnesses a dog disappearing as if it were a phantom. So how did she end up in 1870 and in a man's room aboard  the Ida Belle, traveling down the Mississippi?

Zachary Creighton, a gambler with one goal: to win back Creighton Manor. Marriage is not part of the plan, but since he is found with Gillian in his room, reputations are at stake, his included. To keep peace with his reluctant bride, he makes a bargain with her. He needs a tutor for his nephew Tyler, and she needs a roof over her head until they can annul their sham of a marriage. However, Zachary finds himself falling for Gillian's oddly charming ways despite the fact the woman claims to be from the future.

The gamble is trust, but will the stakes prove too high for Zachery to risk it all and win Gillian's heart?

What listeners say about Creighton Manor

This is a fun time travel book with some unique elements! A dog being the catalyst to time travel was quite unique and fun. I really enjoyed this time travel romance. It is worth taking the time to listen to this story!

The story starts slow but eventually picks up. The story is very entertaining even though I would have enjoyed it even more if the narrator had shown some emotion and differentiated the characters more. Overall a great listen.

"This book was given to me for free at my request and I provided this voluntary review." I didn't realize that this was a time travel book until I started listening to it. Usually I'm not interested in time travel, but this book was very good. It started out a little slow but soon grabbed my intererst. I believe that you will enjoy it as much as I did.

Time travel with a twist. Who knew Molly the dog was a travel guide. But really, this was very entertaining and worth reading. This story take you on a journey full circle. Narration was more monotone without much feeling. At first, I thought it would take away from the storyline. Not so much. I received this audible in exchange for my honest review. I enjoyed it! Thank you.

Good story, I enjoyed everything about the story and characters but I feel it could’ve been better with stronger narration. It was difficult at times to determine the different characters.
I was provided a free review copy and am leaving a voluntary honest review.

I requested and received a free copy of this book and am voluntarily leaving this review.
What a busy book! Whew! Romance, time travel, exes, danger, sacrifice... it's all so much! The story in and of itself was pretty good, however, I had a very hard time with the narrator. The voices we're fairly similar for the different characters, there were no southern accents even though the majority of the story takes place in the south, and most of the narration was delivered with little to no emotion. I feel it let the story down a little bit. Over all though, I think the story was pretty good and worth a read.

Beautiful time travel story. It was a lovely journey to the past, meeting quaint pioneering families and in a time of different morals. Recommended for a clean well narrated story.

Adult situation too much ,not to my liking. The plot for the time travel was good.

Molly was by far my favorite character after all is she is the catalyst for time traveling. Gillian and Zachary are born over a hundred years apart. I loved falling in love with them.
Unfortunately the narration fell really short for me. I stopped listening to the book at one point but did come back to it and I’m glad I did. While I didn’t enjoy the narration I loved the story

From past to present.

Loved the book, the way it moved characters from the past to the present and back. Had a very good romance touch to it. The narrative was very good as well.