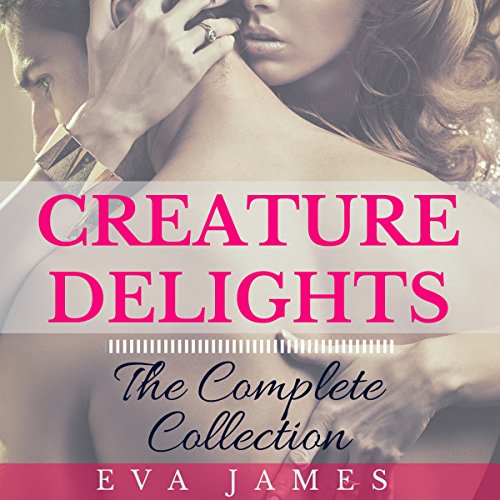 By: Eva James
Narrated by: Cheyenne Madison
Try for $0.00

Warning: These stories were written to unlock your darkest fantasies and innermost desires. They are not for the faint of heart and are not your average erotica. They are not suitable for someone under 18 years of age. Listen at your own risk...or delight!

Inside The Complete Collection, you'll get five full stories, including:

Unlock your hidden desires! When you meet these creatures, it will not be fear you feel but something else...something deeper...something sexier. Will you run for your life...or will you stay and discover a side of the mythological beasts that no one has ever known?

What listeners say about Creature Delights: The Complete Collection

These stories were all I interesting. the one I enjoyed the most was the one about the mermaids. I just connected with it. I would recommend this to anyone that wants a few fun stories.

What would have made Creature Delights: The Complete Collection better?

Has Creature Delights: The Complete Collection turned you off from other books in this genre?

The accents were atrocious, her vocal emphases odd.

If someone wanted formulaic vanilla monster erotica I guess this would work.

I was pretty thoroughly unimpressed with this entire collection of stories.

I enjoyed listening to these adult fairytales. I hope there are more to come. The narrator was perfect.

These short stories were definitely a different take on the ones we heard as kids, and that's not a bad thing. My only complaint is that I wanted more from each story and to know what happens next. My favorite was the story about the Mermaids.

This falls between a 2 star and a 3 star. I didn't "not like it" but it wasn't totally all "it's okay" either.

I don’t think I’ve ever come across that in an audio and it startled me. If I’m being honest, it scared me a little too and I turned the volume nob waaaaay down. Just what HAD I gotten myself into?

A young widow goes hiking alone, makes it to the summit and then hears some grunts that scare her so much she slides down the mountain and breaks both legs. Man, that stinks! No worries though because she’s luckier than most of us. As she’s awaiting a slow, painful death, she’s rescued by the grunter who turns out to be a pointy eared, 7’ tall, man-bunned, green ogre. He sets her legs, feeds and cares for her and before long she begins to feel a stirring in her lady parts. Those man-buns are just irresistible, I guess. They make sweet human/ogre love and live HEA.

This was sweeter and much more vanilla than one would expect. But then again, I’ve read “Bloodraven” by P.L. Nunn and, well, ogres will never be the same for me!

The narration was serviceable but a little monotonous and emotionless for such a saucy little tale. It seemed as if it had been done in one take without any editing as I heard a very apparent stumble. 3 stars

This one’s about a pirate (sorry his name has escaped me) with a southern/cockney/very strange accent. That’s okay as the talking isn’t that important here. The pirate’s brother sends him on a quest to retrieve some mermaid booty or some booty protected by a mermaid. Or something along those lines. It’s a difficult and treacherous journey but he defies the odds and finds the mermaid. Actually there are two of them and they demand he pleasure them immensely before they relinquish their treasure. So he does and promises to come back each year. It’s a win/win/win for him. Why this wasn’t called Ménage a Mermaid is beyond me. Alas, I am sad to report that I found it all a little too vanilla. 2.5 stars

Taken by the Alien

This story sure takes its time to get steamy. There’s a lot of setup for so short a story and too much time is spent listening to the bickering between a team of geeky scientists who are on some sort of alien watch. I just wanted the aliens to hurry up and arrive so these folks would shut up! Eventually the aliens show up and the female scientist, Camille, finds herself strapped aboard a spacecraft. Apparently her “transmissions” (so that’s what she was doing!) were very suggestive and the alien is ready to mate. He smells of flowers and is sort of sexy with his pale blue skin and lime eyes. Tell me, how can a girl say no to that?

The narration felt especially unnatural and stilted in this one. Wait, I think those are the same things, aren’t they? Much to my dismay, the sex was vanilla again and over nearly as soon as it began.

I’m seeing a pattern but I’ll keep going . . . Sheesh, the things I do for you people.

The Spartan and the Sexy Cyclops

This time around we have a lonely gladiator who lost his wife a few years back. Because he has nothing left to lose, he sets out to hunt the Cyclops ravaging his homeland. There’s another long-winded setup, and then it’s all about the insta-lust.

He finds the Cyclops and since he hasn’t “seen the flowers of a woman’s garden” in three very long years, he is attracted to her. That one eye is a thing of pure beauty, doncha know?! They have some improbable sex that surprisingly leaves them both satisfied. But I didn’t buy it. He’s a man. She’s a giant cyclops. No matter how hard I try, I cannot make this math add up.

The Sexy Beast Under the Full Moon

Alice follows the old ways and is hunted as a witch by her pea-brained townsfolk. One night, while on the run from her pitchfork wielding neighbors, she is plucked off the ground by a bewinged creature and brought back to his lair. She soon learns he is a vampire and an insufferable jerk who insists she become his queen, right now! I thought she’d fall at his feet and sexy times would ensue after his oh-so-romantic proposal but instead a werewolf shows up just in the nick of time and saves the day.

She rewards him with some sexy time.

I stopped rating these after the second story because they are all very similar and all suffer from the same short-comings. They are too short with too much setup taking up precious word count, the plots and characters are similar and not developed enough to have any kind of impact, there isn't any fun give and take, the sex is standard (boo!) and usually comes out of nowhere and is over with a groan and a blink. The narration needs some oomph, it was monotonous with strange accents and odd articulation. Overall it a very meh collection of vanilla sex wrapped up in a monster suit . I am sad. I truly wanted to love it, I wanted it to be fun and sexy and over the top crazy but it turned out to be none of those things.

A little odd but good. I was given this book in exchange for my honest review

wow what can I say. yum!

wow, erotica with a twist of supernatural, who could ask for more, I would recommend this to anyone who likes their books with bite and of course over 18.

I don’t usually read many books from this genre, but I really enjoyed this one. The narration brought the story to life and held my interest throughout. The story was well thought out, complete and will keep you listening. I will definitely be watching for this author in the future.

* I was provided a free copy of this book from AudioBookBlast for review.