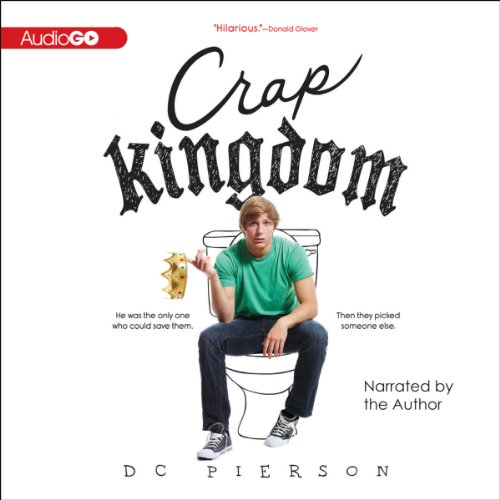 The Chosen One must be retrieved from Earth.

He will bring down the wall and restore the kingdom to glory.

His name is Tom Parking.

With this mysterious yet oddly ordinary-looking prophecy, Tom’s fate is sealed: he’s been plucked from his life and whisked away to a magical kingdom to be its Chosen One.

There’s just one problem - the kingdom is mostly made of garbage from Earth. Okay, well, two problems, the second being that the king hates Tom. Also, the princess likes to wear fake mustaches. And being Chosen One seems to consist mainly of cleaning out rats’ noses at the Royal Rat-Snottery.

So, basically, the kingdom sucks.

When Tom turns down the job of Chosen One, he thinks he’s making a smart decision. But when Tom discovers he’s been replaced by his best friend Kyle, who’s always been cooler, more athletic, and better with girls, Tom wants Crap Kingdom back - at any cost. And the hilarity that ensues will determine the fate of the universe.

“A hilarious and surreally honest book. Crap Kingdom is anything but the first half of its title.” (Donald Glover)
“Pierson’s funny, giddy anti-epic is the summer blockbuster your burnout friend never got around to writing.” (Patton Oswalt, comedian)
“D. C. Pierson’s fantastic, fantastical, and most of all funny Crap Kingdom fits perfectly between Douglas Adams and the Harry Potter novels. And not just because of the alphabet.” (Matt Fraction, writer, Marvel’s The Mighty Thor and Invincible Iron Man comics)

What listeners say about Crap Kingdom

its funny, imaginative, and most of my friends are thespians so this is up their alley.

It was about an actor who was lazy in school and the parents threatened to take that privilege away from him very similar to my senior year.

The scene where the village idiot was impersonating the father.