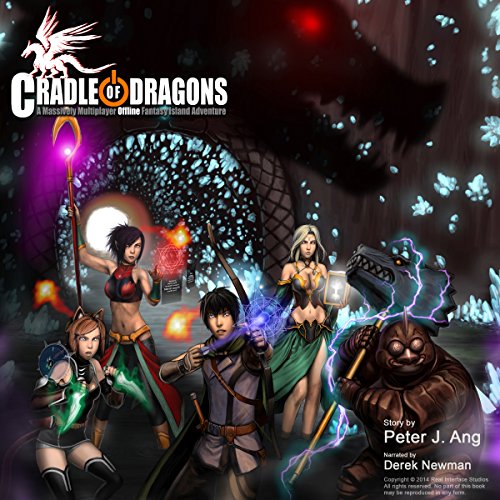 Role Playing Games are taken to a whole new level of immersion when BattleHelm, the leading developer of Augmented Reality systems, builds the world's largest theme park on a remote island in the Philippines modeled after the most popular MMO. Imagine what it's like to experience your favorite videogame in real life...

Well, that's what Ryan Fontanella discovered for himself when he accepted an all-expenses-paid travel package offer to the island. But when the extremely advanced deployment of technology far exceeds his expectations, he learns that even the ultimate place of escapism can't break free from the familiarity of human nature.

Enter a realm where the combination of holographic effects and animatronic beasts blur the difference between fantasy and reality.

Enter... the Cradle of Dragons.

This Audiobook features an ensemble cast, complete with sound effects and wonderful music productions added to give the listener an enjoyable immersive experience.

This Audiobook has been produced by Real Interface Studios.

Special Thanks to the other talents who provided voices for background support characters:

What listeners say about Cradle of Dragons

Would you consider the audio edition of Cradle of Dragons to be better than the print version?

Never got a chance to look at the written version.

Actors were good, easily identified from each other to prevent confusion. Big fan of Fantasy as well though so that was a plus.

Which character – as performed by Derek Newman – was your favorite?

Mostly just the concept maybe someday, but will be all old and stuff before anything similar could be possible :'(

Fun listen, great acting. Some pauses that made me check to make sure my headphones didn't get unplugged but, other then that great work.