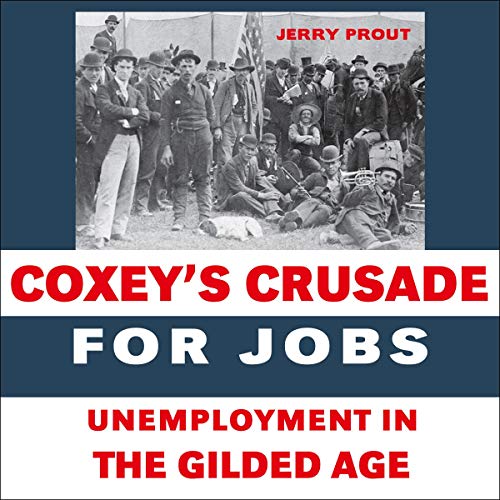 By: Jerry Prout
Narrated by: Tim Toddhurst
Try for $0.00

In the depths of a depression in 1894, a highly successful Gilded Age businessman named Jacob Coxey led a group of jobless men on a march from his hometown of Massillon, Ohio, to the steps of the nation's Capitol. Though a financial panic and the resulting widespread business failures caused millions of Americans to be without work at the time, the word unemployment was rarely used and generally misunderstood. In an era that worshiped the self-reliant individual who triumphed in a laissez-faire market, the out-of-work "tramp" was disparaged as weak or flawed, and undeserving of assistance. Private charities were unable to meet the needs of the jobless, and only a few communities experimented with public works programs. Despite these limitations, Coxey conceived a plan to put millions back to work building a nationwide system of roads and drew attention to his idea with the march to Washington.

Jerry Prout recounts Coxey's story and adds depth and context by focusing on the reporters who were embedded in the march. Their fascinating depictions of life on the road occupied the headlines and front pages of America's newspapers for more than a month, turning the spectacle into a serialized drama. These accounts humanized the idea of unemployment and helped Americans realize that in a new industrial economy, unemployment was not going away and the unemployed deserved attention.

"A highly informative and entirely satisfying study of the contribution of Coxey's 'Industrial Army' to the history of American protest." (The Annals of Iowa)

"An important work in the historiography of Coxey’s Army, the history of unemployment, and the broader history of the Gilded Age." (H-Net Reviews)

What listeners say about Coxey's Crusade for Jobs