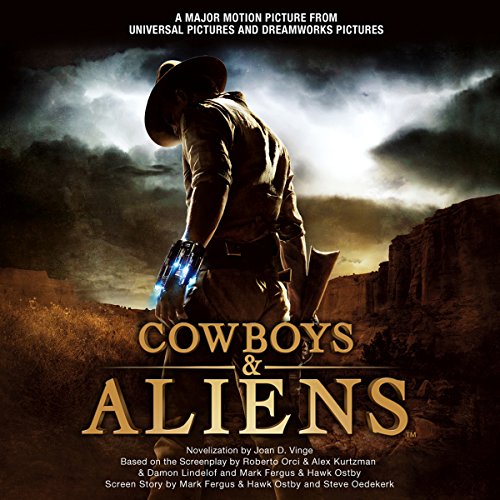 A stranger with no memory of his past stumbles into the hardscrabble desert town of Absolution. The only hint to his history is a mysterious shackle that encircles one wrist. What he discovers is that the people of Absolution don’t welcome strangers, and nobody makes a move on its streets unless ordered to do so by the iron-fisted Colonel Dolarhyde. It’s a town that lives in fear.

But Absolution is about to experience fear it can scarcely comprehend as the desolate city is attacked by marauders from the sky. Screaming down with breathtaking velocity and blinding lights to abduct the helpless one by one, these mysterious visitors challenge everything the residents have ever known.

Now, the stranger they rejected is their only hope for salvation. As this gunslinger slowly starts to remember who he is and what he’s experienced, he realizes he holds a secret that could give the town a fighting chance against the alien force. With the help of the elusive traveler Ella, he pulls together a posse comprised of former opponents—townsfolk, Dolarhyde and his boys, outlaws and Chiricahua Apache warriors—all in danger of annihilation. Unlikely allies united against a common enemy, they will prepare for an epic showdown for survival.

What listeners say about Cowboys & Aliens

Movie turned to Book...Preferred the Movie

Cowboys and Aliens by Joan D. Vinge is a novelization of the movie that came out in theaters in July 2011. If it hadn’t been space month on the blog, I don’t know if I would have normally picked out this book as I don’t generally like seeing a movie before I read the book. However, I gave Cowboys and Aliens a try because I really enjoyed the movie and thought for sure I would enjoy the book. So for this review, I’m going to do a book vs. movie comparison.

Cowboys and Aliens the movie stars Daniel Craig, Harrison Ford, Olivia Wilde, and many other great actors. I love all three of these actors and felt they all played their part exceptionally. I was particularly impressed with the transformation of Daniel Craig’s British accent to a Western accent. He also fits in seamlessly to the Western setting and the cowboy look. Harrison Ford is awesome as usual. He pulls off the grumpy old cowboy persona very well. His character’s voice is grizzled, well weathered, and fantastic and in many scenes he steals the show.

Olivia Wilde’s character is also great but I wish the movie had gone more in depth with her. Daniel Craig and Harrison Ford’s characters were clearly defined and unfortunately her character was not, which is at no fault to Olivia Wilde. Her character, as it was written, is the one that I felt made the movie a little hokey. If they had given her a little more background, I might have accepted or understood her character better.

The movie combines the Western and Science Fiction genres well to create a completely original storyline. Overall, the movie is a fun ride that is unlike anything else in Hollywood at this time.

The narrator, Fred Berman, is phenomenal and does amazing voices for every character, and I really do mean every character. The author, Joan D. Vinge, is also talented and she does a wonderful job painting the settings, describing the action scenes, and putting the reader in the characters’ shoes.

With that said, the book is pretty much exactly the same as the movie. The book does provide more details than the movie and the reader gets a little more information on the characters’ backgrounds. Since I felt the movie lacked a little on the character backgrounds, I was glad to learn more about them and to see things from their perspective. However, there is not a lot of extra detail that the movie doesn’t generally cover. I particularly wanted to learn more about Ella’s character as she has a lot of mystery surrounding her. Unfortunately, the book did not deliver what I wanted. I understood her character better from the book but not a whole lot more.

Understand...It's a Hollywood movie, then a book

If you get that it was a movie first then you'll understand that the book runs like a movie. Not great literature. It reads like a movie. So…if you can get past that then it is an okay but no “take you on a great and soul moving journey” type of listening experiance. There is most all of the Hollywood style Sci-Fi, Good vs. Evil, and Wounded Hero clichés in the story. But come on, like “Snakes on a Plane” the title explains itself. Good for a summer escape. Narrative is good but Fred Berman uses only one voice, he’s not a Roy Dotrice, but his American accent is easy to listen to after a short while if you give him a chance.

Not an action story

More about morals then about cowboys and aliens. The hero goes from acting like a hero to being a helpless idiot whenever the author needed to build suspense during the action sequences. Needed to fast forward through the endless internal moral conflict the main characters repeatedly had throughout the book. Think of Freud's works being sold to a Hollywood producer, "if we added a gun fight between the dreams then it should sell"

Story and narration was a bit slow. Finished it but never found myself wishing my commute wouldn't end.

Entertaining all the way through...

I enjoyed the movie so seeing the characters with those actors in mind really made this book fun. But even if you didn't see the movie you'll love this exciting tale of Cowboys & Aliens made totally plausible by the author! Enjoy!!!

vhe was very good. No shakiness in his has very nice voice to read with very nice

Would you consider the audio edition of Cowboys & Aliens to be better than the print version?

This is difficult to answer because I haven't seen the print version.

Jake and e Colonel were the leads but my favorite was the black dog. I do believe I could write a Masters thesis on the characters presented to us by the dog.

Jake's confrontation with his former gang was well done. He didn't have his full memory back yet and because of his internal conflicts I could feel his pain.

When men were men and aliens were just target practice.

Don't waste your time on this one. There are better books around for you to really enjoy.

This book has it all!

I like books that 1) Have an interesting plot 2) Have characters I grow to care about and 3) Have enough action/events to move the story along. This book really does have all of it! This was adapted from the screenplay of the film now in theaters and was skillfully done. It reads like a western similar to True Grit. I really want to see the film. The only negative thing about the book is the last 10 minutes. (This is NOT a spoiler) The story has practically ended and loose ends are tied up among the characters and, in my opinion, it unnecessarily continues for 10 minutes explaining the main characters closure with his love interests and his inner feelings and blah blah. I guess maybe it wasn't enough for a female writer to let it end after he rides off into the sunset...haha. I could hear my wife saying "Is that it??? Definitely worth a credit! Don't wait another minute!

I found this entertaining, but it seemed to skip over too much. The film itself isn't very good so the novelisation of the movie doesn't stand much of a chance. If the story line had been developed it could of been great but it hasn't so 3 stars.

I definitely got hooked on the story but don't expect much more than the traditional western formula tagged on to Sci Fi. You will have met every character in any Clint Eastwood/John Wayne western.
I'll wait for the DVD before watching the film but I would expect the audible version to be superior to the movie. I did find it a very entertaining way to pass a few hours.

I downloaded this title thinking I might go and see the film - never made it to the cinema but really enjoyed this rather off the wall book !

OK if you don't have time to see the movie

I was looking forward to this book, as I missed the film. I found it confusing and hard to separate many of the characters until I was at least half way through the book, and found it slow moving in parts. I persevered til the end. OK book but not brilliant, though in no way the narrators fault. An awful lot of description and people's internal thoughts, not as much action and not fast moving enough for my taste. A bit predictable. Will pass the time on a long drive. Good concept, the author could have done more with it.

I've always loved a good cowboy and this has all the required ingredients. The villain who isn't really, the rancher who hates everyone, and his no-good son, the Doc who is also the inn keeper, and of course Apache Indians - Then add aliens - really? But it works!
The intro says the book was based on a screen play, but luckily I never saw this or even heard of it, so I listened without bias to an easy-on-the-ear narration, with twists and turns that kept me hooked. I thoroughly recommend it.