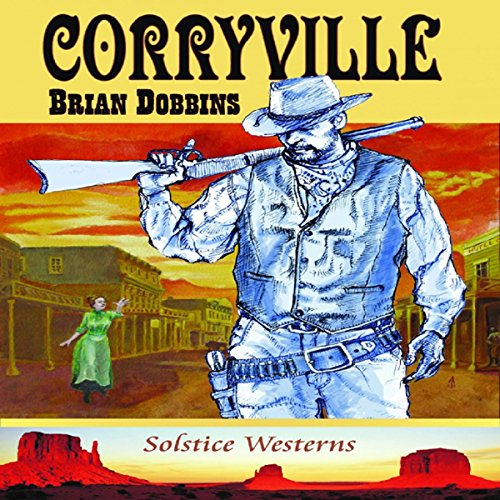 Wyoming Territory, 1886. Ethan Darny and his young cousin Ben Tyler are eking out a marginal existence as ranch hands when they find themselves involved in a violent bank hold-up. The robbery goes very wrong and two of the casualties are the town sheriff and deputy. Wounded and frightened, Ethan, Ben and Will Sully start off for the lawless town of Corryville to escape capture and to formulate a plan for their unsure futures. But their flight is marred by more violence. Struggling with conscience and once again unnerved by sudden misfortune, they arrive in Corryville seeking medical attention, shelter and sustenance. They soon find themselves drawn into the deceitful, dangerous world of vicious saloon owner Mike Kenney, who plans his own criminal agenda for them. Moses White and Wade Loveless, two of the toughest and most determined U.S. Marshals, pursue them across the Wyoming territory and are nearing Corryville. They're accompanied by Deputy Jim Cade, who left his wife and young daughter to catch the men who killed his friends. When he meets up with the outlaws, he may blur the fine line between justice and vengeance. Corryville is about to suffer a great deal of bloodshed as the showdown draws inexorably closer.

Made me a Western fan!

If you could sum up Corryville in three words, what would they be?

How I found myself rooting for one set of men and then the other!

Have you listened to any of John C. Zak’s other performances before? How does this one compare?

I have not, but I enjoyed his tone and found his reading very enjoyable.

If I could have I would have done so.

This a great novel. I'm not a western genre fan, but Mr. Dobbins is making me re-think that!

If you could sum up Corryville in three words, what would they be?

GREAT, GREAT, GREAT! In Corryville, writer, Brian Dobbins, creates a believable world in which all of his characters must endure a hardscrabble existence in a remote part of the Wyoming Territory...no railroad, no telegraph, and no law. In this story, we are not presented with good guys in white hats and bad ones in black hats, but rather, we enter the minds and lives of people who must make crucial decisions that affect not only their own lives but, more importantly, the lives of friends, neighbors, and those they love. Every character must face decisions that could lead to self interest or nobility. I took this into account when narrating this audio book, and strove to integrate these contrasting elements into the portrayal of the characters.

Though set in a long ago era, Corryville, in my view, takes a clear-eyed view of the culture of violence and its sometimes unintended consequences. Parallels may be drawn with issues we face today, as some individuals continue to demand their own brand of justice at the end of a gun barrel.

Final chapters filled me with an aching poignancy, as characters revealed their humanity and, in some instances, fatal flaws. Ethan's letter in the final chapter, still has the ability to haunt, with its tinges of regret and hope; not unlike the ways in which most of us experience the events of our lives.

Ethan. He was a good man thrust into devastating circumstance, but he never lost sight of trying to do the right thing, against all odds.

Which character – as performed by John C. Zak – was your favorite?

Creating the voices of Kenney, the tough Irishman, and Pappy Miller, the stationmaster, was fun and rewarding.

If you could take any character from Corryville out to dinner, who would it be and why?

I would ask Jim Cade and his wife out to dinner and ask them to talk about how their lives have changed since the massacre at Corryville. What are their hopes and dreams, now?

I absolutely love stories where ordinary people are thrown into extraordinary circumstances, and where they may have to turn a blind eye to certain things in order to protect themselves and those whom they love. Nothing for these characters is black or white...all shades of gray...today's saint might be tomorrow's sinner, but a return to sainthood can even be a possibility...and all in a place lacking in telegraphs, railroads, and law.