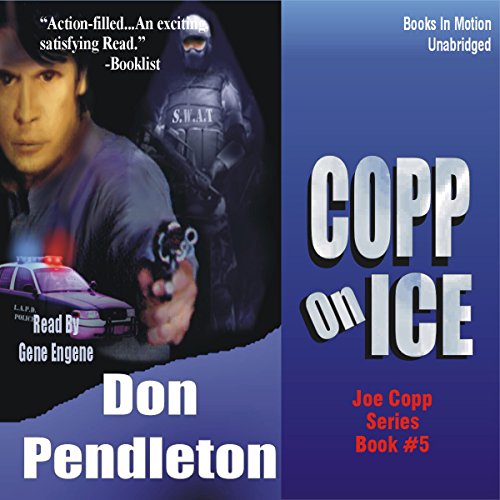 Serious trouble is brewing in Brighton, California, a sprawling coastal community on the eastern edge of the Los Angeles Basin: Its Mayor has just been murdered, and the chief of police has resigned amid rumors of corruption in his department. Now, ex-police officer Joe Copp has been hired by an old friend, the current Brighton City administrator, to get to the bottom of the municipal mess.

Copp's investigation uncovers a trail of corpses and a tangled web of sex, drugs, and official corruption. Suddenly, Copp finds himself skating on thin ice, caught in a shoot-out with a deadly accurate SWAT team.

"Action filled. Copp is a likeable tough guy. An exciting, satisfying read." (Booklist)
"Pendleton proves again he is the equal of Mickey Spillane when it comes to the hard-boiled mystery." (Mystery Writer)
"Pendleton deserves his popularity. A real whiz-bang of a story." (Associated Press)

The narrator sounds way to much like Walter Brimley (the old guy with the mustache) to me. I'm having trouble relating to the plot because I keep seeing an older person selling insurance to the elderly. Can't get past the voice to really give the book a chance.