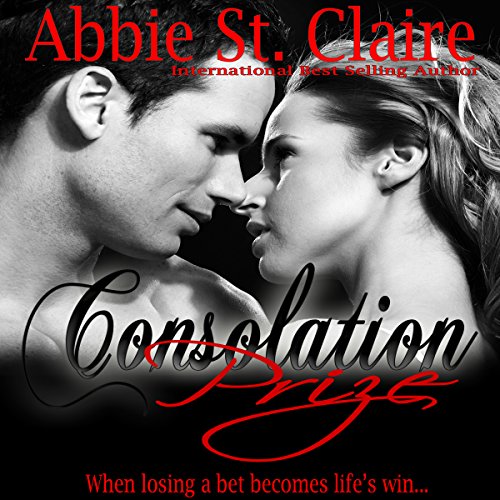 By: Abbie St. Claire
Narrated by: Pamela Peters
Try for $0.00

A woman who knows that the only guy she ever loved was a cheater and a slimeball, but hates the idea of being the last one of her friends to be single.

A man who spent years chasing the beauty queen and always coming in second, takes a bet from his friends for a little action. Little does he know that when they up the ante, they also get to pick the girl.

Flynn Davis had spent years waiting on Courtney to give up the chase for the crown and settle down to married life and babies. When they broke up, he thought maybe he'd missed his chance to have the family he always wanted, regardless of how hard his friends, Drew and Allen, tried to hook him up.

Chloe Howard had her heart broken at Moody's Bar when she discovered her boyfriend cheating on her. She left with tears, he left with a beer in his face. Now, at 29, she's convinced the only males that give her any attention are her patients and they can't talk back.

A bachelorette party brings her to Moody's Bar once again. A guys' night out brings Flynn. Because of a bet, they're matched up whether they want to be or not, despite how hard they fight it. If only she could remember what happened last night.

What listeners say about Consolation Prize

If you could sum up Consolation Prize in three words, what would they be?

Chloe, she is a great female lead character....so down to earth and real...I like that in a book!

When Chloe wakes up and finds out she is going to have a baby...she took the news perfectly!

How Chloe stayed strong even after being so injured, she was awesome!

Having listened to this combo of writer and narrator before, I was glad to get a chance to again...and this little story did not disappoint me! It is a quick and well written romance tale, of 2 people coming together by chance, and falling in love...Chloe and Flynn are both coming off bad relationships and have a chance drunken meeting that turns into forever....I loved it...well worth a listen!!!

This is a great steamy book; written by Abbie St. Claire and narrated by Pamela Peters. Chloe Howard is a veterinarian who had her heart broken by her ex who was a cheater and slime ball. She hates being the last of her friends that is still single. She is ready for a fun night on the town. Flynn Davis had his heart broken when his ex-broke up with him. He loses a bet to his friends and finds out that they get to pick out the girl he has to pick up at the bar.

The narrator Pamela Peters, did a wonderful job, and was very easy to listen too. She is one of my favorite narrators, every book that I have listened to by her I have enjoyed and this one was no different than the others. She did every characters voice different and was easy to tell which character was speaking.

This book has a great story; if you are looking for a great romance, then you need to get this book. I am looking forward to the next book by this author. Once I started listening to this book, I didn’t want to stop until the end.

A Review copy was provided to me in exchange for a fair and honest review. The free book held no determination on my personal review.

Finding love where you least expect it ...

What did you love best about Consolation Prize?

I felt that both Chloe and Flynn were real people. So many times you read/listen to a book and the people seem so perfect. Hair always in the right place, the right size etc. Ms. St. Claire was able to create two people that you would want to be friends with.

Which character – as performed by Pamela Peters – was your favorite?

I really enjoyed the character of Chloe. Ms. Peters gave her all the depth and emotion needed to make her someone you would want to be friends with. Ms. .Peters' narration draws you into the story and has you wanting more.

While I didn't have an extreme reaction to this book, I was very satisfied with the way it ended. I would love to see what happens next with Flynn and Chloe.

I received this book from the author, narrator or rights holder in exchange for an honest review.

The author, Abbie St Claire does a superb job on this story. Her writing style is unique and she has a way of making you feel everything she writes! It is a rare thing when you feel each emotion like you are there! It is a fantastic story too! The narrator Pamela Peters once again does a fabulous job on the delivery of this book! She has a smooth, warm way with her voices that make me feel at home while I listen to them. I love all her voices, accents and emotions she puts into her voices! The two together are explosive! Great job ladies!

***I was gifted this audio book in exchange for a honest and unbiased review of my thoughts on it.***

St.Claire's Books Will Now Be On My Wish List


Chloe Howard's only serious relationship ended when she caught her ex cheating on her at the local bar. Flynn Davis thought his beauty queen was ready to move on to marriage. She wasn't, she left him for California -her parting words, 'she never had loved him.'

In the opening we find Chloe is a veterinarian. She is called to care for one of her regular customers horses. While there she sees several men that she doesn't recognize. She thinks nothing of it. She arrives home to a message that her friends are throwing a bachelorette party AT the same bar she had been humiliated before. But because she is a good friend AND with some liquid courage she gets dressed up to go

Flynn and his friends are hoping for a regular guys night out with a side bet. Since Flynn hasn't been on a date, or in any sort of relationship, for so long, they challenge him to bed a woman that they pick out. Of course, it is a drunk Chloe…

This is a fun romance book. It is relatively short so I didn't expect there to be much depth. The story line seems natural and flows well. There is a good amount of hot descriptions of "intimacy."

Pamela Peters narration moved with the pace of the story. I enjoyed the performance. She is able to perform each character in a believable way. Some female narrators sound silly when they try too hard performing male characters. It becomes distracting. That is not the case with Pamela. It feels like she is telling the story and it is very natural. 4*'s

*I was given a copy of this book to listen to in exchange for my review.* I have gone back and forth on whether or not to try Abbie St. Clair. This gave me an opportunity to try St. Claire and I am sold. I will not hesitate to add her books to my Wish List.

I enjoy leaving reviews, as I know that I read them the reviews of others before I purchase a book. If you found my review helpful in your decision about this book by Abbie St. Claire and/or the narration of Pamela Peters, would you please select yes directly below this paragraph? Thank you so much.

Please consider "following me" here on Audible.com. I purchased a lot of books by authors that I am faithful to. I also have the opportunity to review books in all genres, many that I would not pick up on my own. I have been pleasantly surprised by new authors and narrators. Thanks!

Chloe Howard is a single 29 year old woman and the last single woman of her group of friends. After the one man she fell in love with left her heartbroken in a bar and him covered in her beer, she wasn't so sure she ever wanted to be with anyone else again. Having been roped into a bachelorette party she decides to temporarily dye her hair pink in the outfit that her friend is making her wear. She decides liquid courage is the only way to face the night. Then walks in Flynn Davis.

Flynn Davis waited on the wrong woman to make up her mind and finally decided that he wasn't going wait any longer. He decided to focus on his life and forget about women for a while. His friends want to have a wager that they get to pick his one night stand at the bar they are heading for drinks.

Chloe then wakes up in Flynn's bed and no recollection how she got there. Will Flynn chase after a woman who has intrigued him from the beginning? Will Chloe learn to trust someone again?

Wow! Abbie St. Claire is amazing. I absolutely loved this story and the characters just made it all that much better. Chloe and Flynn's story was fantastic. I loved all their quirky friends who push them together. The story pulled me in and I didn't want to let go. I would definitely love to read more by this author.

Would you listen to Consolation Prize again? Why?

The female lead, it was nice to see a strong character

The first few scenes made me laugh when she was getting Dutch courage to wear the hen party outfit, I would have needed to swig the whole bottle

Laugh out loud at parts

An enjoyable short story which is well narrated, will look for others from this narrator.